REVIEW OF JOURNAL OF A VOYAGE FOR THE DISCOVERY OF A NORTH-WEST PASSAGE FROM THE ATLANTIC TO THE PACIFIC: PERFORMED IN THE YEARS 1819-20

I may be committing a sacrilege for reviewing a "incunabulum", so, just forgive me those who disagree with my view.

The narrative of the first Parry´s voyage in search of the northwest passage  is not an adventure novel nor the appasionate story told by an ardent adventurer which one could  initially expect, at least it hasn´t been that much for me. Some times, you have to deal with boring paragraphs full of details about how they collected temperature data, how they managed to extricate themselves from the grip of ice, how they measured the depht of the channels through which they sailed, how kind or evil was the weather in the area, which were their coordinates, and a long "so on" of important and unimportant details. Maybe an accurate radiography of the enviroment they went through but somehow of little interest for the average reader.

Navy officers weren´t precisely skilled writers, though many learned to get along with writing quite satisfactorily and published decent narratives of their voyages, in some occasions they were even funny, as it is the case of the infamous Edward Belcher, who abandoned the four ships of his squadron in the Arctic, that wouldn´t be the case of Parry from my point of view. Captains were not supposed to be erudite and witty writers, but sailors, men of action with few or nothing of interest in the arts of writting, so they all must be regarded as winners of that particular battles.

However, and I hope this will redeem me from what I have just said above, at the end, the Journal of a voyage for the discovery of a north-west passage from the Atlantic to the Pacific performed in the years 1819-20 represents the first book which tells the story of a two year voyage in this Barrow´s new age of exploration, and though it lacks sometimes, always from my humble point of view, of some of the necessary pepper which must be present in a narrative of the sort to  keep the reader glued to its pages, there are many chapters present on it which, independently of the quality of the style, undoubtedly sculpted with its words an important part of the polar history. 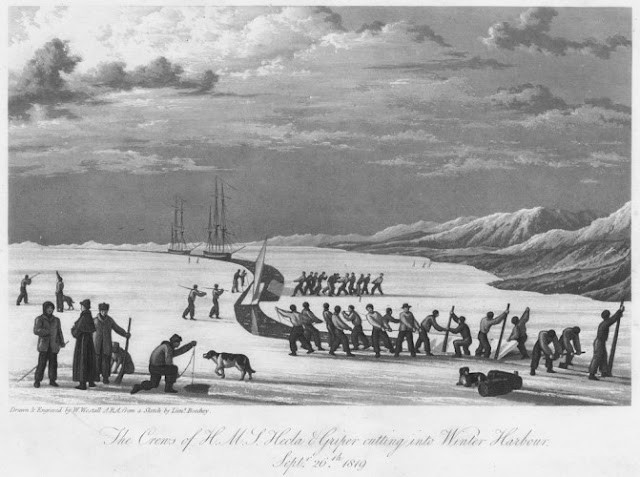 Sometimes, Parry addresses the subject of how the men behaved in those harsh conditions. In the book there are satisfactory and vivid descriptions about how were conditions inside the ship during the long cold and dark winter which they had to spent in Winter Harbour in Melville island. To me, this is by far, the most interesting part of the book together with their encounter with the natives  who lived in the east coast of Baffin island. Your heart will shrink when you read how he describes the moment the sun said goodbye to them before an absence of two months. 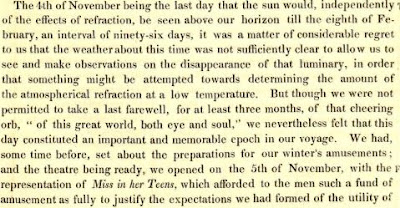 Parry describes, coldly I would say, how he struggled untiringly at the beginning of the winter to keep the sides of the ship free of ice, a sample of how ignorant he was about the conditions which would be waiting for him ahead weeks after. Of course he didn´t accomplished such a thing, temperatures were so extreme that the ice couldn´t be kept at bay. Sea freezes and embraces the ships in those latitudes mercilessly and nobody and nothing can stop that even nowadays. Sometimes,  the Arctic sea hug their visitors with such intensity and love that ships collapses and sink to the bottom of the ocean. 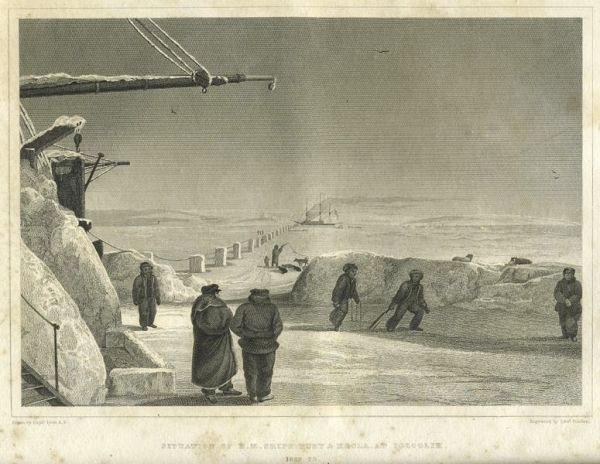 In spite of the awful cold atmosphere described, things on board got a little bit warmer when Parry tells how they enjoyed the theater plays and the newspaper "North Georgia Gazzette" published to entertain the bored crews during those hard days.

Condensation, an evil difficult to erradicate, damped mattresses, blankets  and berths making the life on board miserable for those who had the misfortune to sleep close to the interior side of the hull. The extremely low outer temperatures combined with a defficient ventilation provoked an actual rainfall below decks. Parry describes how they dealt with that inoportune enemy, a lesson which surely made the life of those who followed him in the Arctic would thank him for sure. Parry is not ashamed to demonstrate the world they were learners in a new enviroment:


I learned in this part of the book that an affordable range of temperatures among 1 and 5 ºC above zero, when the heating system was working, could be expected inside the ship when outside temperatures reached -45 ºC. An extreme cold which you can feel in your skin when you read about how was the daily life inside those fragile wooden shells which protected them from the harsh outside conditions. Parry had the opportunity to disprove some urban legends regarding the effect of cold during his stay in Winter harbour: 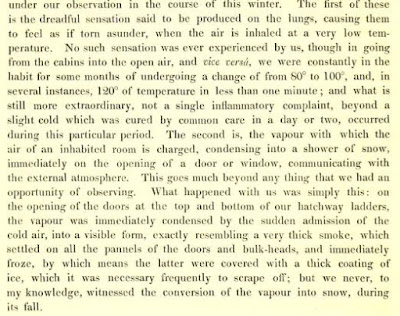 He also experimented another curious  effect, terror of photographers, which I experimented myself in Finland two winters ago with my DSLR camera while I was at 28 ºC below cero:


The lessons learned during the voyage were very useful for subsequent expeditions and new techniques were developed by himself to erradicate the condensation which provoked those annoying rainfalls below decks and were the origin of more precautions for the coming voyages.  The lost of a hunting party which struggles for three days to find his way back to the ships, revives the feeling that the explorers were outsiders, extraterrestrials, in an hostile world which didn´t welcome them.

Parry fought the first appearance of their worst enemy, Scurvy, planting mustard seeds and collecting some other plants in the closest shores. Animals of all kinds were seen here and there, wolves, bears, foxes, etc. till the winter fell, when they simply disappeared not to come back till months after. Auroras and halos descriptions put also some colour to the narration from time to time and give the text a sense of beautiful reality, specially if you visualize the tough men looking at the sky open mouthed amazing themselves with the bright and boogie spectacle.

One cannot avoid smiling to himself a bit when you realize how inadequate were the means they used to travel overland when Parry described that a party of twelve men, led by himself, took their backpacks, abandoned the ship the first of june of 1820 and crossed Melville island in a northward direction till they reached point Nias. They dragged themselves a cart equipped with wheels. An interesting sight, indeed, for all the arctic hares and foxes who likely saw them traveling like that during the trip. The cart broke during one of the last steps of the voyage and had to be abandoned there, wheels included. Some of its pieces most surely must still be  in that island waiting to be found. Those intrepid but inexperienced men, slept in a rough and simple tent made of blankets.

It is surprising that there was just a casualty during the whole voyage, the poor William Scott, who died victim of a combination of factors during the winter. His body was opened and his guts analysed carefully. A vivid description of the autopsy is included in one of the annexes of the book in annex called "Remarks on the state of health and disease on the board the Hecla and Griper"

Parry describes their stay with the Inuit of Clyde river, an event which brought to Britain more knowledge about how the inhabitants of those cold regions lived there and together with that, some Inuit items and even a Kayak, which I will track down to see if it still exists somewhere. 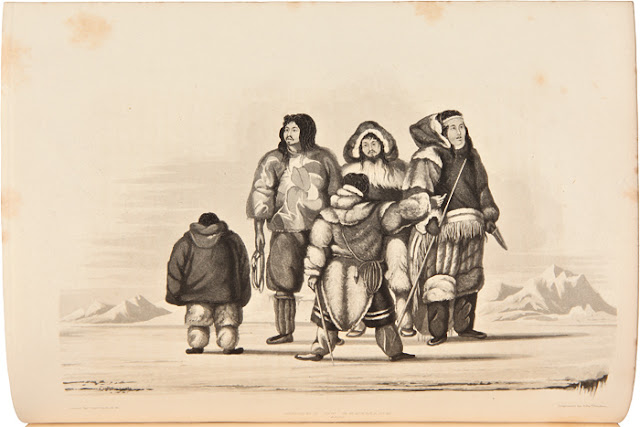 As a conclusion, my reflection is that the multiyear ice west of Cape Dundas inMelville island may have detered and eventually stopped Parry from accomplishing a full crossing of the Northwest Passage, but didn´t prevent him of bringing home an unvaluable experience which would make easier the life of future participants in polar expeditions. He didn´t learn however the more essential of all lessons which could have helped to save many lives in the future, he didn´t learn to live off the land from the natives he met, nor did it many of the expeditions who followed him.
Publicado por Andrés Paredes en sábado, octubre 06, 2018 6 comentarios: