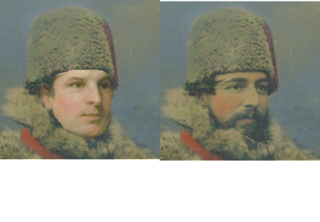 This is going to be a short post, I can assure you that. As I asserted in my last blog publication, we never should stop searching for new pictures of our beloved and ancient explorers. I can guarantee you all, that I have performed multiple searches in the Internet trying to look for a more contemporary portrait of John Richardson, the Naval surgeon who accompanied John Franklin in his first  overland expedition, and whose role in it saved likely the life of John Hepburn, the faithful sailor, and maybe the life of Franklin as well.

And what is what I have found?, a new and overexposed photograph of an aged John Richardson, likely shot at the last stages of his life. Richardson died at the age of 78 years old in 1865, so either the portrait was taken at about that age or was taken when he retired from active service at the age of 68. I would like to know who took this picture and why was it taken.


For those less familiar with his life, I will summarize here that John Richardson was an exceptional man, not only known for his arctic explorations, he participated in the Franklin´s first and second overland expeditions and in one of the first searching expeditions organized to find the lost Franklin in 1848, but also for his contributions to naval surgery and science.

His later work in the Harslan hospital, where he worked for some time together with William Edward Parry, consist on part, on training the surgeons who would join arctic expeditions.

No matter how harsh his gesture could seem to you on this, or in other similar portraits of him, his achievements  speak of him in a very friendly way. You can read all the details in the brief biography of the Dictionary of Canadian Biography. He stood out over the average men of his time in the three different disciplines mentioned above.  He engraved every stepp of his three different careers in the path of history. As an arctic explorer, he demonstrated outstanding phisical conditions, as a surgeon he achieved so many big things which would need a whole book to explain them all, and as a naturalist, his published work speaks for itself, he rubbed shoulders with the most prominent scientist related with that matter of his time. But on top of that, he demonstrated with his actions in moments of extreme danger at the very edge of complete disaster, that he was an extraordinary and well natured human being.

You can find other portraits of him here, our large and growing collection of portraits and pictures of Arctic and Antarctic explorers. This project consists on a pinterest board, a cooperative project where, mainly Stephen Nicholson and me, are contributing to put faces to all those heroic explorers.