There are very few portraits of the mourning wive of our vanished explorer John Franklin and, as far as we currently now, there is only an existing photograph from her which Russell Potter found time ago as if it were a tiny needle in an massive haystack.

This time, while looking for details about a curious Polka, ...yes, a Polka... called "Polar Bear Polka" about which I expect to say something here someday..., I have stumbled upon this unexpected engraving. I have not a clear idea about who its author is and if it is contemporary to the publication of the book where I have found it.

This engraving appears in the book: "Professor Sonntag´s thrilling narrative of the Grinnell exploring expedition to the Arctic Ocean in the years 1853, 1854 and 1855" which was published for first time in 1857. Lady Franklin was born the 4th of december of 1791, so if the engraving was made by the time the book was published she should be about 66 years old by then, age which, I think,  definitely doesn´t match the age of the woman in the portrait. Judging from her appearance I would say she looks quite far younger than that age. 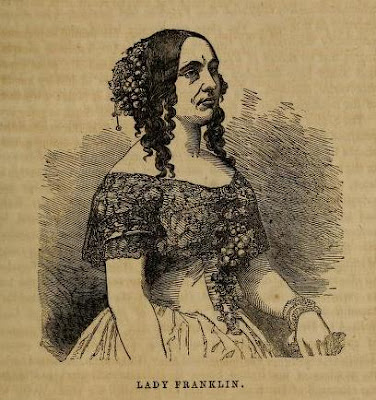 Engravings were the way illustrations could appear in a book or newspaper in the past, and they usually come from paintings or even from photographs. Because the pose of our beloved Lady, I would dare to say that this particular engraving must have come from a painting which for some reason has not survived or it just hasn´t appeared yet. Her long hair and uncovered neck makes me think this could be a portrait of her in her thirties. Perhaps the painting was made previous to the day of her wedding.Time will say.

My first impression when I took a close look to her serious countenance is that hers was a face invaded by a deep sadness. Because of that I thought this was a Lady Franklin on her fifties who was currently enduring the dissappearance of her husband. There are deep tracks of suffering and pain carving her lower eyelids forming dark eye bags which sadden an otherwise determined look, but too, her infinite will and resolution are visible in the pronounced lines around her mouth. It has been the long hair and naked neck which have made me think otherwise. Did her suffering begin before John Franklin sailed towards history in 1845?

The difference is notable if we compared this new portrait which I have found with this other shown below, much more known, on which she shows a much maturer look and which was allegedly painted in 1838 when she was about 46 years old. She still bears a friendly smile, almost affectionate.

In all of her portraits there is a certain hidden pre-Victorian beauty. You can see through her eyes the life of a a pretty, young and visionary girl who got married with one of the most successful explorers of the time, and too, the tiring life of a woman who traveled thousand of miles.

A controversial figure, lady Franklin, arise on me various feelings, mainly of affection but also of astonishment. She was unquestionably an interesting character who deserves to be analysed in detail. I would love to get deeper on her psyche and ascertain which were her actual drivers to get married with a husband with which she would hardly would spend some few years together. I would give my kingdom to who could explain me which were the reasons why she developed such coldness towards her stepdaughter and why she never untiringly stopped traveling all around the world.

She was a woman who I would say never found not only John Franklin, her husband, but who never found whatever other thing she was after. I have the feeling that she never filled the blanks of her ambitious life through which she wanted to accomplish everything.