IF THE FRANKLIN EXPEDITION HAD HAD AN ATLANTIC CABLE...

Reading, as I am doing now, "Weird and Tragic SHores", I am now aware that the first transatlantic cable was laid on the ocean between the British islands and America during the years 1854 and 1858. I´ve always supposed that it was laid soon before the first world war, but it was not. It was much sooner.


Charles Francis Hall was fascinated by this demonstration of science, (almost science fiction) and of modernity, a demonstration which could be compared perhaps on that time to what the human kind would think about the Moon landings years after. I am also fascinated now by this achievement, and oneself cannot, but being amazed about how a steamer and a barge crossed the Atlantic, more than one hundred and sixty years ago, laying the longest cable of the world to be able to communicate with people at thousand of miles of distance. And one also can´t avoid being less than fascinated if thinks that, while this operation was happening, the Henry Grinnell expedition together with the biggest amount of ships had ever been in the Arctic were trying to find Sir John Franklin and his lost expedition.
When Franklin was lost in the Arctic the comunications in the world were based on letters which crossed the earth from one side to the other. The Postal service in Britain in  the nineteenth century was surely the most effective, sure and quick one. Remember that following a postal service line, George Back crossed England from the south to the north during the beginning of the first Franklin Expedition when he lost the ship in the southeast shores of England to end reaching them in the Orkney islands soon after.
It is true that the Telegraph had been already discovered, but it was still on its beginnings and, of course,  there weren´t telegraph lines in the Arctic and there weren´t neither post offices in the Arctic Archipiélago nor horses to carry rapidly to the civilization their messages with news about their discoveries, with their letters addressed to their families containing their dreams, fears and anxieties and with their SOS messages.
Franklin couldn´t use all those wonders, Franklin couldn´t use the telegraph though it already was a reality on that time. Balloons, bottles, pigeons, cairns and medals tied to arctic foxes were the only means available on that time for the expeditions which were in desolated regions to communicate  with the rest of the world.
In a crazy world which was witnessing an eruption of  discoveries and amazing scientific achievements  which increased and improved the communications in a way never seen before, paradoxically, the last and lost Franklin expedition was without any question alone.
Publicado por Andrés Paredes en lunes, septiembre 16, 2013 2 comentarios: 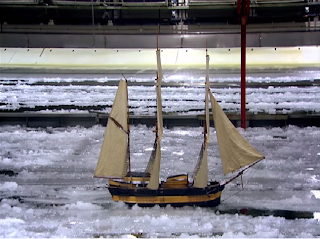