Maybe the less glamurous story related with the legend of the Open Polar Sea is that one which tells the story about how Joseph Moxon, the expert engraver of plates for terrestrial globes, who became later hydrogapher of the king Charles II, overheard in 1656 some dutch sailors talking in a tavern about how they had managed not only to reach the North Pole but to even surpassed it by 2 degrees of latitude.

Of course, as it uses to happen in these cases, when one starts digging and getting deeper into an anecdote like this, alternative stories show up. Some of these deviations from the original account transports you far from the appealing vision I had in mind of a heavily drunk Joseph Noxon being cheated by a bunch of no less drunk sailors sculpting a fascinating view of an open polar sea right on the top of the world  in the mind of the hidrographer while singing some Sea shanties.

The first version of the facts I have read said that a dutch whaler ship, which load wasn´t enough to return home, having noticed that the sea north of Spitzbergen was clear of ice, decided to take the risk and sail northwards (to search for more whales I guess) and "at the distance of two degrees went twice round it". Apparently the captain of the ship didn´t conceal this fact, more the opposite, and asked anyone suspicious to look for contrasting the information among his crew members. According to this account, Moxon had heard a "respectable ducht whaler" (no mention to any sort of party nor drunkenness), saying that he had sailed under the very pole (that means the ship didn´t reach the North Pole but apparently only 88 ºN) in a weather as warm as it could be found in Amsterdan in summer. Apparently, "athenticated" testimonies of that time revealed that some ships could have actually reached even 85 ºN.

There were other dutch whalers who told similar stories, this time they assured to have reached 89 ºN.  This version of the facts, is presented in a more "sober" manner in The critical review, or annals of literature, Volumen 62, and differs slightly from those other I have found , like that presented in the fantastic article "Reconsidering the Theory of the Open Polar Sea" by the historian Michael F. Robinson author of an inmense list of awesome articles. In this article is said that Moxon was actually drinking beer with those Dutch sailors, what else could have he been doing in a tavern, for ... sake? Don´t blame him for that.

I can´t hardly doubt that the result of the digressions which surely followed the third round of ale (paid almost with totally certainty by Moxon himself) ended taking shape carved with a knive in the wood of the tavern table, painted with improvised ink in the rough tablecloth (if there was any) or, more likely, drawn with any sticky substance at hand, in a napkin (if such a thing existed by that time). I have witnessed, along my experience as an ingeneer, how many problems have been solved or great ideas have born during lunchtime while eating with some work mates, I have seen many paper napkins being folded with extreme care and put in the shirt pockets of many respectable technicians like a treasure, so I can easily imagine that this imaginary, but at the same time quite probable, Quixotic map could have existed and changed hands many times till it ended in John Barrow´s desktop. I know this it is mainly and only the product of my sick imagination but it is also a fascinating possibility. Let´s think for a moment this napkin actually existed and let´s come back quickly to our story.

That encounter left in Moxon a deep footprint, he was so impressed that years after he dare to write a short essay about the matter "essay A Brief Discourse of a Passage by the North-Pole to Japan, China, etc in 1674." 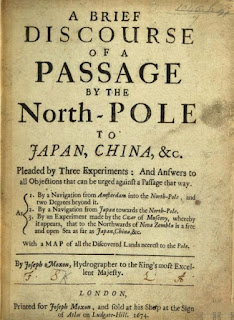 With this paper at hand... what better manner to learn the truth than drinking from the original source? This is a fascinating panphlet where Moxon indulges himself in a description which looks more like a guilty declaration and confirms that he actually drank beer in that tavern, his casual mentions to his thirst and the use of the adjective 'sober' when referring to those  "ingenious man" who could have heard that story seems a clear case of "Excusatio non petita, accusatio manifesta". The whole text is not long and very interesting by itself, I have rescued here the more relevant passages describing the encounter in the third round:

"I have credibly been informed by a Steer-man of a Dutch Greenland Ship, that there is a free and open Sea under the very Pole, and somewhat beyond it. And I for my own part give credit to his Relation, and do conceive that any sober ingenious Man would do the like,... Being about  22 years ago in Amsterdam, I went into a Drinking-house to drink a cup of Beer for my thirst, and sitting by the  publick Fire, among several People there happened a Seaman  to come in, who seeing a Friend of his there, who he knew went in the Greenland Voyage, wondered to see him, because it was not yet time for the Greenland Fleet to come home, and asked him what accident brought him home so soon: His Friend (who was the Steer-man aforesaid  in a Greenland Ship that Summer) told him that their Ship went not out to Fish that Summer, but only to take in  the Lading of the whole Fleet, to bring it to an early Market,  &c. But, said he, before the Fleet had caught Fish enough to lade us, we, by order of the Greenland Company, Sailed into the North-Pole, and came back again."

As if that was an easy thing to do. Moxon follows:

"I entered discourse  with him, and seemed to question the truth of what he said. But he did ensure me it was true, and that the Ship was then in Amsterdam, and many of the Seamen belonging to her  to justifie the truth of it: And told me moreover, that they sailed 2 degrees beyond the Pole. I askt him, if they found no Land or Islands about the Pole? He told me No, there was a free and open Sea; I askt him if they did not meet with a great deal of Ice? He told me No, they saw no Ice.

I askt him what Weather they had there? He told me fine warm Weather, such as was at Amsterdam in the Summer time, and as hot. I should have askt him more questions, but that he was ingaged in discourse with his Friend, and I could not in modesty interrupt them longer. But I be∣lieve the Steer-man spoke matter of fact and truth, for he seem'd a plain honest and unaffectatious Person, and one who could have no design upon me."

But however convincing the sailor was, or thick was the fog originated by the alcohol , both things couldn´t avoid arising certain questions in Moxon´s mind, at the end of the day he had his own red lines. Doubts about how could possibly be so warm up there in the North pole when at other lower latitudes was so cold or how could those sailors have managed to return home if the needle of their compass should have been unable to point north. He quickly found answers to those objections and found plausible explanations for them in the number of hours the sun stays above the horizon in summer at that latitude added to the fact that oceans were warmer than coasts and land, etc.

The truth is that this "Open polar sea theory", which we know had been originated much before by Nycholas of Lynn, lasted longer than what any reasonable mind could have imagined and was the cause of the constant delivery of so many audacious polar explorers to icy traps, which sometimes claimed an expensive price. Were all those "believers" as affected by their boundless imagination and optimism as Moxon was when he was drinking beer in Amsterdan?

If the open Polar sea ever existed  will be always unknown but these testimonies clearly matches Scoresby's ones produced much later. That was the match which ignitiated Barrow´s first expedition towards the North Pole in 1818 under the command of John Buchan and the sadly famous Sir John Franklin.  Do whalers of that time or those centuries before like Scoresby wanted the governments of the most powerful nations to send expeditions to open new whale fisheries for them?

Our imaginary napkin with an open polar sea drawn on it among stains of tomatoe and beer, kept changing hands from Barrow to Kane, from Kane to Isaac Hayes, Hall and others, who burnt some extra logs adding haunting testimonies wich talked about waters free of ice north of Smith sound. The very same Franklin could have formed part of an iceberg, as Richard King so accuratelly foretold, when he sailed north as high as 77 ºN east of Cornwallis island and then further north of its tip. Paradoxically, he then found his death a year after in the south.

Nobody apparently paid attention to the frustrating attempt to reach the North pole by foot, walking on the surface of the capricious ice cap (the first of this class), performed by Parry in 1827 who dragged two inmensily heavy sledges loaded with boats on their top to sail in the warm open Polar sea. He was the first on experiencing that walking a mile north meant to go backwards two.

The napkin, meanwhile, started to metamorphose into a  much more complex formula which included new ingredients like the gulf current, visits of whales from one part of the world to the other, etc. As Robinson clearly tells in his article, the subsequent and more modern expeditions  like USS Jeannette, Nares, Peary, Andree, and ultimately and definitely the bold Nansen attempt, whased with strong detergent pitilessly the misleading napkin leaving after a thorough and heavy centrifugation a completely white piece of cloth more similar to a continuous and unbroken frozen ice cap than to any warm and boreal ocean.

We may never know.