HOW THE TERROR ARRIVED TO TERROR BAY AND WHAT HAPPENED AFTER?

Yes, the ship HMS Terror has been found. Though some of us thought the efforts would be focus in disembowel what is inside Erebus, Parks Canada has not stopped its searching for the Terror and they finally have located it.


This is for me an interesting movement taking into account that their resources are limited and that it took more than 160 years to find it. Wouldn´t have been more natural to finish the task you have at the reach of your hand before drifting after what could be considered a chimera trying to locate a nail in haystack? Thank goodness they didn´t do that and kept on searching, actually, I think would have done the same thing.

But as Russell Potter has opportunely said, the finding arise more questions than answers. If we go back to Thomas Gould map of King William Island we can discard the more improbable routes which were asignated to the drift of the ships, the one which goes to the West towards Dease Strait and the one which took one of the ships to Matty Island surrounding King William Island (KWI) through Simpson strait. 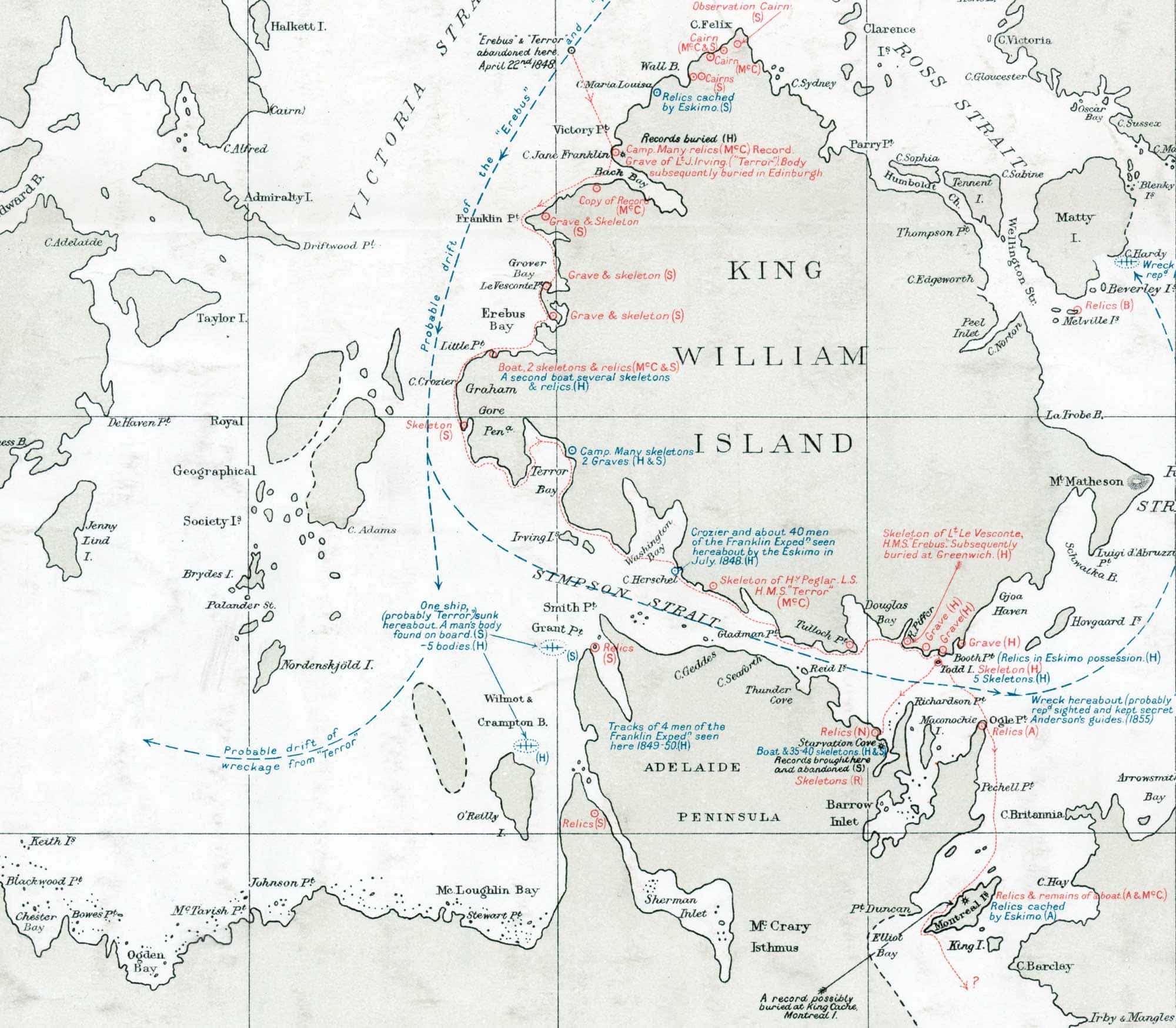 What is more, evindences for the moment seems to demonstrate the ship had arrived to Terror bay not by the ice drift but sailing. Though this is still to be demonstrated I am confident that this is what actually happened. Terror Bay together with Washington bay are for me the better places to winter you can find in that region. Far from the pressure of the ice which comes south from Victoria Strait. Remember that Simpson strait is free of ice in summer, thing which doesn´t happen some miles north.

My guess, and obviously I am not an expert on this matters, is that after abandoning the ships north of Cape Felix in 1848, all the men returned to the ship motivated for several potential reasons. It was too soon (April of 1848) to begin to walk (too much cold, too much snow, etc), the ice melted around the ships or they saw how they drifted south quicker than they initially thought. Maybe what provoked their return was a combination of this three reasons.

John Ross during his escape from his ship Victory, abandoned her in 1832 at such early season, but  returned to the ships time after before the end of the month because weather was awful and for more provisions. It had taken them to walk 110 miles to advance 18 during the whole month. You can see what kind of conditions they endured during those days and make yourself an idea of what happened to the men of the Franklin expedition under similar circunstances in Ross´s account of his story here.

They left the boats and provisions in the farthest point they reached and then departed again from the ship in may, reached the boats where they were left and continued north towards Fury beach and its huge depot of food. All the men had to drag the sledges individually in turns (with its boat on top of it) first one and then another and then another. At the end things weren´t that dramatic and they covered a distance of about 370 km in two months (may and june). They arrived Fury Beach the 1st of july after leaving the ship for second time the 1st of May. Crozier (if he was still alive) surely had to resort to that method either.

We don´t know which point they reached during this first attempt. Maybe they arrived on May to Little Point north of Graham Gore peninsula making a big effort (80 km from Victory point following the shoreline). There were found two boats separatedly, one with two skeletons inside. Maybe it was there where they saw how the ships had drifted south from the point they had been abandoned and that they weren´t far from where they currently were and then remanned and took them to Erebus bay to spend the winter of 1848-49 . That would explain the graves and remains found in the sites NgLj-2, 3,4 and 5.

It is also very probable, that like Ross, they returned to the ships where they originally were in 1848 on May, after a month of traveling,  and then tried a second time, in june or july to go south. Then, in August they saw the ships approaching Erebus Bay and  went aboard them to bring them to Erebus Bay. That would put them in Erebus bay in september. We don´t have reasons to think both ships were separated at this point, it looks like as if the narrow corridor between Royal Geographical islands and the west coast of KWI had forced them to stay together.

In the spring of 1849 they could have forced their way with the Terror passing Graham Gore peninsula somehow to Terror bay, maybe dragging the ship through small leads in the ice close to the shore or maybe sawing the ice and wasting the remaining strength they had. The Erebus at this point was so damaged by the ice that they had to abandon it while she was still trapped in the ice. Anyway, they needed all the available strength to drag just one ship. That would explain the lack of graves and bones in Gore Peninsula. Erebus drifted south alone till the point she was found in 2014. The Terror on the contrary, in perfect shape arrived at Terror Bay at the end of september of 1849, men were exhausted, moral was destroyed and maybe about 90 people (I have calculated that about 19 had died at this point) had to prepare the ship for another winter in that island.

A camp was put ashore for hunting purposes and to stay in contact with the occasional visits from the Inuit hunters. That was the winter of 1849-50, their last aboard the ship. That wasn´t a bad winter at all, southern than they had ever been in previous seasons they could hunt caribous and do some fishing. Only two men died that winter and where buried near the camp but the ice didn´t open that spring. Anyway, what were the chances for them to sail surrounding KWI by its south end if there was a high chance that there wasn´t any pass east of the place where they were? What if Poctes Bay really existed?

They decided to abandon the Terror again on foot  and continued with their original plan, to travel east and then south to the mouth of Back river, then they would have to see what to do. Wouldn´t that mean that a second note should be found in Terror bay telling the story till that moment?. If the ship voluntarily wintered there and was subsecquently abandoned, THERE MUST BE A NOTE SOMEWHERE IN TERROR BAY.

The rest of the story is the same that we had reconstruct one hundred times. There were 80 remaining men by then which splitted into two groups, one commanded by Crozier and the other by Fitzjames. That would explain the 30 or 40 men saw by the Inuit at Whasington bay. Men died while they struggled the summer of 1850 till they reached Todd island in the south east corner of KWI. There at least one group crossed to Back´s river mouth and camped in september in Starvation Cove. The winter fell and the remaining of those 30 or 40 men died there one by one during the winter of 1850-51. The second group took the boats and went north through Rae Strait trying to reach Boothia peninsula and get out of that Hell via Fury beach and Port Leopold, the same escape route followed by Ross in 1833. A boat capsized in Matty island and the other couldn´t go north of that point because the ice conditions. They crossed Boothia Istmus, crossed the gulf of Boothia and continued east to Fury and Hecla strait where some of the men were saw by the Inuit living there. Those men didn´t survive the winter of 1850-51 either, Rae arrived to late to that point in 1853 to rescue anybody.
And that´s all, I wanted to do this exercise of imagination. What do you think? May I be right? Surely not but I enjoyed reconstructing the story!