WILLIAM SMYTH, THE PAINTER AND THE EXPLORER

Everybody likely knows this painting. It is in the cover of the book "Buried in Ice": 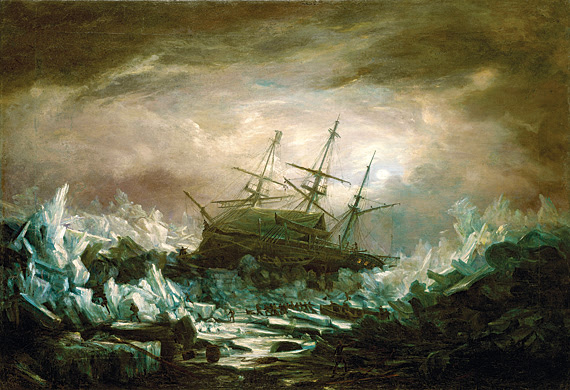 "Perilous position of H M S Terror Captain Back in the Arctic Regions in the summer of 1837"
http://www.antiquesandfineart.com
Author William Smyth

But perhaps not everybody knows that its author was a veteran explorer and mariner. He is, at least he is for me, a kind of secondary character of a masterpiece film.

William Smyth was born in the year 1800 and passed away in the year 1877.  He entered in the Royal Navy only thirteen years old. In 1825 he was under the command of the Captain Frederick Beechey  in the HMS Blossom towards the Bering strait. Their mission, among other things was finding the MacKenzie expedition of John Franklin.

After, under the command of the Captain Charles Henry Paget, he accompanied at William Bunbury McClintock (cousin of the later famous Leopold McClinctock) in the ship HMS Samarang towards the waters of South America with the "hide" objective of chasing and destroying slave ships. Leopold was also on board with only 11 years old, it seems that later he would define himself as having then a weight no more than the "1st Lieutenant Newfoundland dog". They were traveling since july 1831 to january of 1835. During this journey it seems that their ship cross its way several times with the "Beagle", and it seems likely that W.Smyth could be on board of it.


In june 1834 he made a boat and land trip while staying at Perú from Lima to Belem. The journey (it has to be a hard one which lasted eight months) is narrated in this book writen by him: Narrative of a Journey from Lima to Para, across the Andes and down the Amazon: undertaken with a view of ascertaining the practicability of a navigable communication with the Atlantic, by the rivers Pachitea,Ucayali, and Amazon, published in London by John Murray, in 1836.


In may of 1836 under the command of George Back he went on board of the HMS Terror on his journey towards the Hudson Bay in order to try to cross the Melville peninsula. It was here, while the HMS Terror was besset on ice, where W.Smyth was inspired to paint after the expedition, the magnificient and well known painting above showed "Perilous position of H M S Terror Captain Back in the Arctic Regions in the summer of 1837"

William Smyth painted several South American ports during his years in the Paget´s mission, and he also painted in 1836 more paintings of the ice-captured Terror, not so well known but equally interesting.

Part of his other works are here: http://www.wikigallery.org/wiki/artist54018/Lieutenant-Smyth/page-1

On this second link there is acurious painting of the Navy men playing football over the ice close to the Terror.

Another interesting link is this other with some sketches of the F. Beechey expedition towards the Bering Strait. Among others, there is a curious engraving of the crew of the Blossom erecting a pole with the intention of being sighted by the Franklin expedition. The rest of the engravings made are here.

He commanded several ships after this expedition in missions in South America and near the Good Hope cape. At the end of his career he was promoted to the rank of Admiral.

The main reference I´ve used to draft his biography has been obtained from here, I reccomend its reading because there are more descriptions about others important character of the time: