How many times have we heard or read this sentence or similar others like this?:

"In 1845 the one hundred and twenty nine men of the Franklin expedition dissapeared in the Arctic and were never seen again".

Could we assert this fact and be one hundred percent sure we are right? or perhaps should we consider the possibility that the composition of the expedition was in fact one hundred and twenty eight men and a woman? Could we say that each one of the  components of the Franklin expedition was a man?

Why should I suggest that there could be women or girls on board one of the ships, Erebus or Terror, or perhaps in both of them?. Unfortunately, I haven´t any clue which could suggest such thing, any at all, but agree with me that this is a tempting thought and besides, they wouldn´t be the first ships on doing it. There were precedents.

The Royal Navy didn´t accept women on board their ships in the nineteenth century and before, they were considered a bad omen but, however, it happened, and it happened with some frequency. Who could distinguish a girl from a boy of around ten years old dressed with the clothes of a cabin boy.

There are a few number of documented cases of women who went on board ships. Sometimes they boarded voluntarily looking for earning more money, looking for freedom or only to accompany their lovers. In other cases, the less glamurous ones, they were forced by their partners to go on board. In both cases they had to conceal their gender having to dress up like men.

(*) If I had to bet, I would bet that this particular Cabin boy appearing in Wikipedia was in fact a girl. Were all the cabin boys of that time disguised women?

If we study the particular case of the nineteenth century polar expeditions..., What could be more tempting for a sailor in love than bringing her beloved girlfriend on board his ship when this was destined to stay at least three years far from her? What could be more tempting for a girl or woman than participating in the longest and more isolated expeditions of that time?. In case of being discovered they couldn´t be dismissed in the middle of the arctic archipielago, and the layers and layers of thick clothing will help them to protect their hidden secret. What better chances could have a woman than in an enviroment of a relaxed discipline and of not much corporal higiene where flogging was scarce and bathing was even more scarce?. 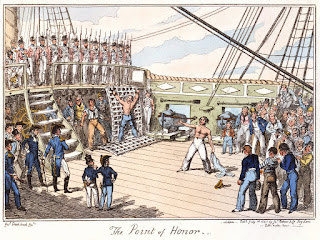 There are a number of known cases. At least three happened as early as the eighteen century: Hannah Snell, Mary Anne Talbot  and Anna Maria Real others  were reported in the mid nineteenth century like the one of Anne Jane Thornton who travelled from England to America after her love.

The stories of some of the women mentioned above are described with some detail in the blog "Sailors in disguise" and also here in the section "Crossdressing sailors" of this blog. Of special interest is the case of Mary Anne. The story of a young girl of about ten years old which enroled the Royal Navy as a consecuence of a dramatic family situation. The story is told here by one of the officers who discovered the issue and who, through his words, reveals the crew´s fondness toward this girl:

Though perhaps it could be considered strange, women caught while acting as men were simply dismissed from the Navy without retaliation, however, those caught practicing sodomy, were not so lucky. There is a particular case where in the same ship were caught a girl who pretended being a boy and also a Lieutenant who was reported for abusing of a boy. The Lieutenant was condemned to gallows and a testimony of the girl against the lieutenant was taken into consideration during the trial even after having revealed her identity,

The astonishing case of William Cavendish (Mary Lacy) who was carpenter of a war ship during the seven years war, reveals that, at least for my understanding, somehow, the Admiralty was aware of these kinds of practices. She was not only not punished  but she even received her deserved pension  when she retired after revealing the authorities she was actually a woman. Her case was famous later after she published her own experiences in the book: "The History of the Female Shipwright".

Other tales are more tragic, sometimes sailors were found out to be women when their bodies were recovered from the sea. I wonder if we still could be surprised if the forensic analisys of some of the skulls found in King William Island reveals some day that one of the men of the Franklin expedition was in fact a woman.

There are several subjects related with the Royal Navy about which is hard to find enough literature, I talked about one of them when I dug about sexuals aspects of  polar expeditions. The other subject is this one, the presence of women at sea in the Royal Navy during the age of sailing. The National Maritime Museum has made a guide which compiles several sources of information which address directly this issue:

In the National Maritime Museum link you can find interesting titles which one can´t avoid feeling tempted to read:

Iron Men and Wooden Women: Gender and seafaring in the Atlantic World 1700–1920

Women Under Sail: Letters and Journals concerning eight women travelling or working in sailing Vessels between 1829 & 1949
Sailors in Skirts : a Serendipity of Sea-faring Incidents

One thing is certain, it was a common fact that those women who enroled in Navy ships outstanded by their bravery and sense of duty. Some of them even climbed ranks to the point of becoming captains of the foretop and they  always were very well considered by their mates.


However, I believe we have little chances this fact could have happened in, for example, the Franklin expedition. The boys on board Erebus and Terror were not so young to allow a girl could be confused for a boy. Robert Golding, Thomas Evans, George Chambers and David Young were all of around eighteen years old.