POLAR MOVIES AND DOCUMENTARIES - SINCE THE VERY BEGINNING

History of film have been riddle with polar related movies almost since the very moment it was conceived.

Some years ago I started to compile all those polar related movies in a Xcel file which you can find below available to be downloaded. My intention was to bring them to light orderly decade by decade explaining my opinion about those which I had watched and trying to rescue some of the anecdotes related to them, some quite tragic, by the way. I even wrote a first post in an abandoned blog project where I started to talk about the polar movies released in the 1920s and which I will rescue now and will  translate into english for continuing with the rest.

As a sort of a preview of the posts which are to come, I will tell you that I was very pleased when found that in one of  the firsts films set in the polar regions "A la conquéte du Pôle" of 1912  by George Méliès, the director of the more known movie "Le Voyage dans le lune", the spanish participant in the race to reach the North pole, which is the theme of the film, is called with the appropiated name of "Cerveza" which means beer.

NOTE: Thanks to Kenn Harper, the renownedd Canadian historian specialised in Inuit history, culture and traditions, I have just added two new films to the list which now are in first position in the list, are they the first polar movies of the history? These are "The way of the Eskimo" and " Lost in the Arctic" both shot in 1911. 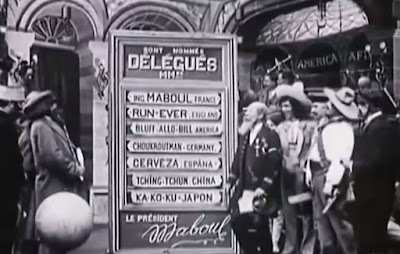 The film is available in Youtube here, it actually deserves to be watched:

The list of polar movies is not too long, I still have to update it though, so don´t become disappointed if you can´t find the very recent "Amundsen" or "Arctic" movies. The list will surely grow much more in the coming years since the poles and their exploration history looks to be fashionable again and besides, there must be much more polar movies out there which I have still to find.