UNDER THE POLAR STAR, A ROMANTIC MELODRAMA

Polar exploration has always inspired novels, movies, poems, sculptures, comics, songs but also occasionally theather plays. That´s the case of "Under the Polar Star, a romantic melodrama", a play I stumbled upon by chance while fishing polar related pictures in Google. It was a couple of posters showing scenes from the play which called powerfully my attention and which drove me directly to the search: 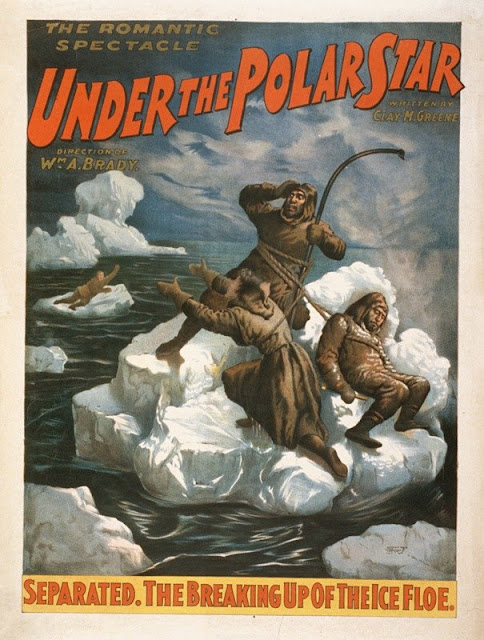 In this one above, what looks like a group of survivors is perched in a small ice floe looking alarmed, while they are calling one of his mates which lies on a smaller one further away.

A second poster shows the moment when the cabin boy is found to be actually a girl: 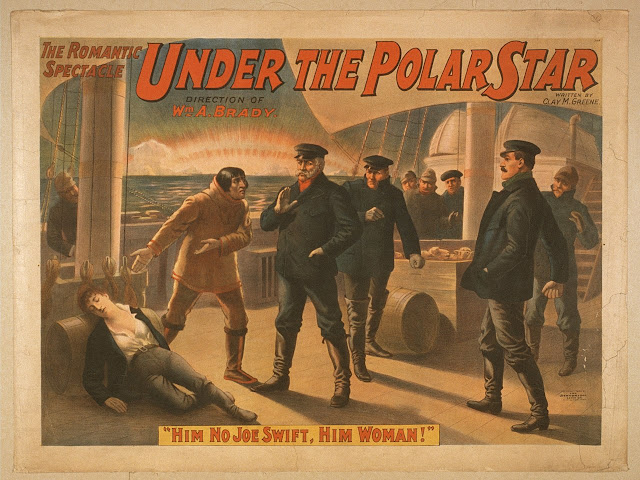 The story is told in five acts by its author Clay Meredith Greene, a prolific writer, actor and director author of a good number of works, and was directed by William A Brady. Cinematography hasn´t been invented by the time the theater play was on the stages in 1896, a pity, because both men, writer and director, walked between these two different ages and directed also  movies in the subsequent years, "Under the polar star" could have been the first polar movie of all times.

The origin of the idea from which comes this play is unclear to me but, from what I have read, I have deduced, it could have been inspired by the recent expedition led by Fridtjof Nansen to the North Pole (1893-96), but also by Peary´s expeditions in the north of Greenland and maybe by some other earlier american expeditions like DeLong´s and Greely´s ones. Clay M. Green was born in 1850, so he could have followed during his adolescence the proceedings of these expeditions and have been impressed by the tragic outcome of some of them. But what is certain is that those were convulsive times, the activity in the arctic was frenetic. The North Pole was at siege and it would be a matter of time it would be eventually conquered, or at least that was what was said so. There is a particular episode in which the leader of the expedition is murdered and there are suspicions which lead to the expedition surgeon as the perpetrator, for me, a clear hint to Charles Francis Hall alleged poisoning by the surgeon of his expedition to the North Pole, Emil Bessels.

Undoubtedly, the marketing for the play was intense as the abundant collection of posters showing several of the more poignant scenes demonstrates: 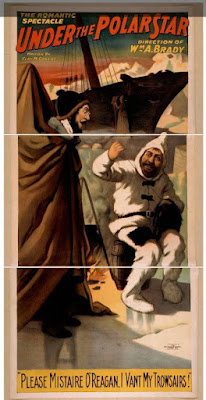 Maybe the last one posted above, which shows the American flag upside down, is one of the bizarrests and which makes one wonder what was actually happening there. From others, and from the comments form the bottom of the pictures, it looks that maybe the story wasn´t a complete drama, but more likely a script written in a certain comical tone

The play was released in New York in the Academy of music the 20th of august of 1896, two days after Fridtjof Nansen and Johansen had arrived to Hammerfest, after his heroic attempt to reach the North Pole, where both explorers were enthusiastically received, and the same day that it was known that the Fram had also arrived safely to  Skjervøy.

The theater, located in Manhattan, which counted with 4.000 seats (maybe too much for the available room, according to some critics),  was built in 1854 and demolished in 1926, thirty years after the play was represented.

I haven´t been able to find the whole script of the play but from the review written by Arthur Hoeber, an renowned painter who maybe is better know as art critic, in the Illustrated American of which he was assistant editor, we can get an idea about how the performance was: 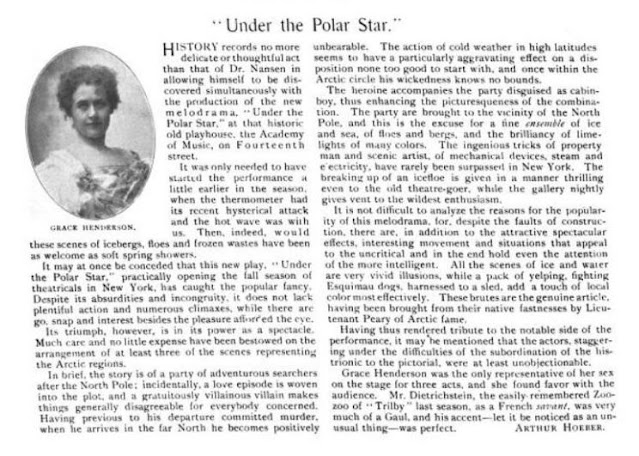 "It may at once be conceded that this new play "Under the Polar Star"...has caught the popular fancy. Despite its absuddities and incongruity, it does not lack plentiful action and numerous climaxes, while there are go, snap and interest besides the pleasure affored the eye."

"Absuridities and incongruity" ...this makes one eager to have been present that day...

The plot appears to be simple and involves a murderer supervillian, a love story performed by a cabin boy who happens to be a girl, a fact which surprisingly and wonderfully gives life to a blog post I wrote years ago where I played with the idea that some polar expeditions could have counted with girls "CABIN GIRLS UN ARCTIC EXPEDITIONS".

The reviewer follows making our mouths watering even more:

"The party are brought to the vicinity of the North Pole, and this is the excuse for a fine ensemble of ice and sea, of floes and bergs, and the brilliancy of limelights of many colors. The ingenious tricks of propierty man and scenic artist, of mechanical devices, steam and electricity, have rarely been surpassed in New York. .... All the scenes of ice and water are very vivid illusions while a pack of yelping, fighting Esquimau dogs, harnessed to a sled, add a touch of local color most effectively."

These last addition to the FX were provided by Peary who surely was still keeping the sledge dogs from his last expedition to Greenland of 1892.

Grace Henderson played the role of the cabin girl, acting under the name of Helen Blaine, a cabin girl of thirty six year old by that time. In her biography in Wikipedia, though short, her appearance in the play is described as follows:

"In 1896, she starred in Under the Polar Star, an elaborate play complete with a facsimile of a large sailing ship and real on-stage sled dogs."

Hoeber´s article includes some pictures made by the photographer Jimmy Hare, who a year before had become photographer for Illustrated American magazine, and to who we should thank the fact that we currently have the only known pictures taken from this play. 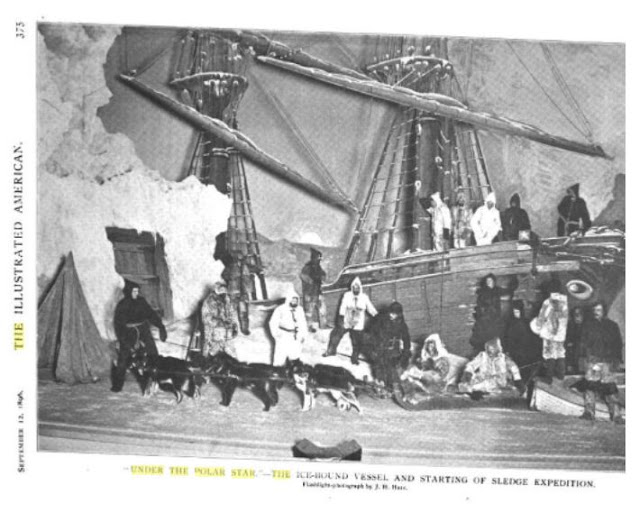 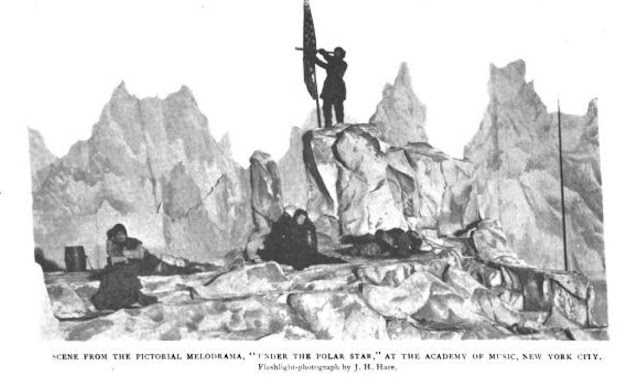 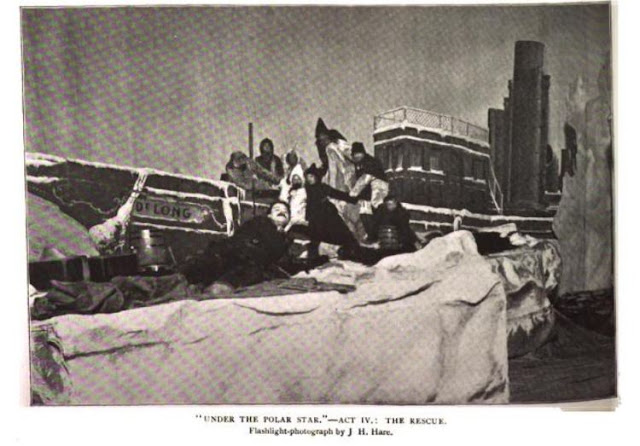 The number 10th of the Gallery of Plays and Players from Illustrated American gives some extra information and an extra picture taken of the play. There were seventeen actors in total, one of Spanish surname and what lookslike a french first name called Bijou Fernandez: Many of these actors continued their careers as silent film actors. The case of Cuyler Hastings, who apparently performed brilliantly the the evil character of William Brandon, is a little bit dramatic. He was surely chosen by his intense look apart from his skills. He would play after the role of Sherlock Holmes for Conan Doyle´s "Sherlock Holmes" theater play written in 1897 but will end  dramatically and abruptly his career after shooting himself in 1914 because some sort of paralysis had driven him away from the scenes: 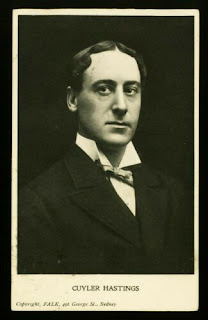 In this second article is mentioned that the first performance was indeed a coincidence with the appearance of the lost Nansen and his ship. The path followed by Greene´s script was as ardous as the conquest of the North Pole itself, it took several tries before William Brady decided to take the risks. The previous article posted above seems like an excerpt from this other and longer one, and there is no doubt it was  written by Hoeber as well.

Extra details about the plot are given in this article and can be read here: 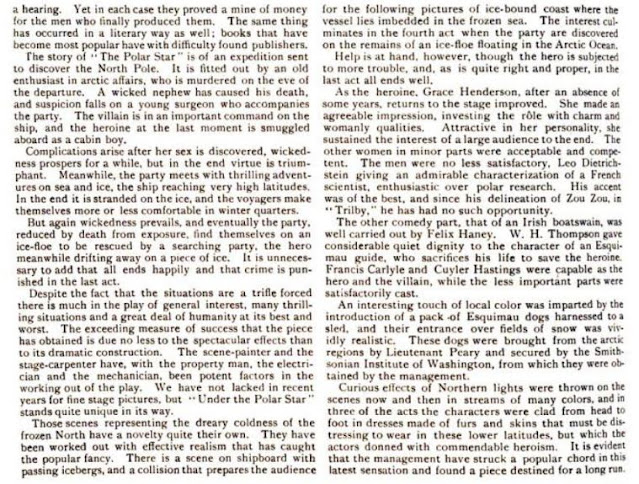 The result was a success, the actors performed well but above all, the special effects did their job and not only captivated the public attention but even amazed the critic who reluctanly agreed to say:

"Despite the fact that the situations are a triffle forced there is much in the play of general interest, many thrilling situations and a great deal of humanity at its est and worst. The exceeding measure of success that the piece has obtained is due no less to the spectacular effects than to its dramatic reconstruction"

We know that the play was in the theaters, in the Boston theater specifically, at least till the 14th of february of the following year and for a last week the 7th of march, as these pieces of news advertises: 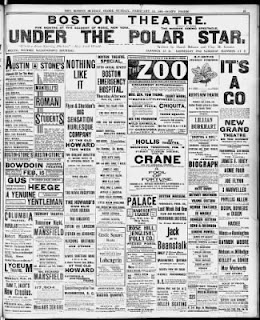 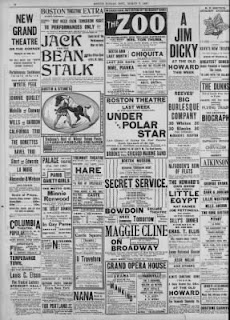 During my research, I have found other books under the title "Under the polar star", which nothing (apparently) has to do with our story but just the name. Google books includes, however, a reference to a publication of 12 pages by Boston Theatre but its content is not available.

I wish I could have acces to the script of this mysterioys play and be able to imagine the rest what haven´t been told in my head. From my opinion, and having not explored much further and thoroughly the matter, this work, could perfectly be the first polar play performed on stage in a theater.