MUFF´s ODISSEY AND THE ARCTIC NEWSPAPERS

It was common during polar expeditions of the nineteenth century to start writting newspapers by both, officers and sometimes also by men, in order to fight the boredom of the three long months which lasted the winters at those latitudes. William Edward Parry was apparently the first on doing so during his expedition of 1819-20, maybe because he was the first navy ship of a relatively "modern age" on wintering in the Arctic.

They published weekly The North Georgia Gazette and Winter Cronicle of which Edward Sabine acted as editor. Such was the success of those initiatives that the habit was soon closely followed by his successors and some of those outburst of ideas and imagination ended eventually published formarly under the format of books. In words of Parry: 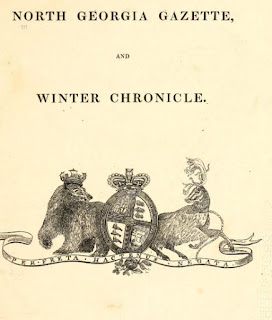 One only needs to read some of those articles to realise that we are not in front of the result of naive or boring texts, obligatorily exercises ordered by the commanders, but before of elaborated and witty ideas developed into hilarious pieces of news.

In 1850 below decks of the ship Assistance, belonging Horatio Austin´s squadron in search for Franklin, it was published "Aurora Borealis", every fortnight, this newspaper provoked the delight of those who read it. They even counted with a print press which initial purpose was to print message for the balloons addressed to meet the Franklin men, it is not necessarily to mention that the press ended being used to print the newspaper, songs and so on. So much was it used that the men ended printing in leather and even in blankets.

To understand better and endorse what was the result of this spontaneous camaraderie, I have copied here what the Preface of the publication of Aurora Borealis wrote about the authors of the newspaper:

"The popular opinion seems to be, that the literary attainments of British sailors seldom exceed the acquisition of some boisterous song, and that only the very erudite amongst them can succeed in scrawling a letter to their friends at home.

In the " Aurora Borealis," however, we find articles written by veteran tars, whose home since boyhood has been upon the sea, that would not disgrace the pages of some our magazines. These men with frames of iron, with a courage and a stem
endurance that nothing can subdue, show themselves possessed of a delicacy of imagination and a power of perception that one has great difficulty in reconciling with the honest roughness of their appearance. Some years ago an officer, high in command, gave it as his opinion, that men entirely uneducated
made the host soldiers and sailors. Here, however, we find, that the men from before the mast, who contributed to the " Aurora Borealis," are amongst the most exemplary in Her Majesty's service."

Wise words, not written by Erasmus Ommaney, commander of the Assistance, Sherard Osborn or John Ross (who wintered close by and apparently participated in the project) are refered to in third person, but, judging from the depth of them, were maybe written by the very same and legendary McClintock. In the other ships of the Squadron, Resolute and Pioner a similar initiative was carried out under the maybe more known name of "The illustrated Arctic news". In the subsequent wave send by the Admiralty in search of Franklin in 1852, the Belcher squadron, similar newspapers were also edited and published.

Here I post a couple of those pieces of news I have rescued from the book "Arctic Miscellanies: A Souvenir of the Late Polar Search and which surely will make you smile if not laugh. I considered particularly interesting the Muff´s adventure which inspired the title of this post: 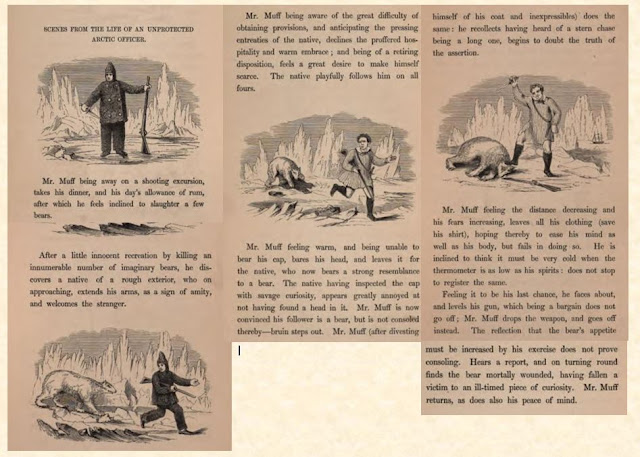 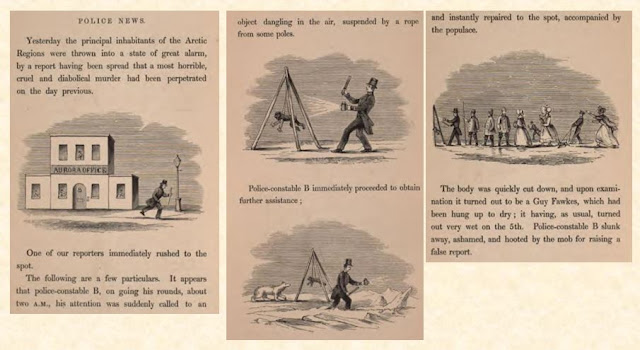