When Sir John Franklin vanished during more than two years trying to find a northwest passage without giving the smallest signal of life to the outer world, the Admiralty lazily began to organize searching expeditions for him. The most varied number of ideas of all sorts produced by all kind of people, appeared in the Admiralty mail box describing the most surprising and imaginative means to locate the explorer and his lost men.

These facts brings to my mind the relatively recent events happened in Thailandia, when that group of children got trapped in the interior of a very complicated cave called Tham Luang. A lot of ideas about how to perform the complex rescue were put on the advisory board´s table, some of them impossible to carry out, but others like Elon Musk´s capsule or minisub were concepts which could seem shocking at first sight, but which for some sounded plausible after second thoughts.

Some of the suggestions to locate Franklin made during the years that the rescue missions were being organized were mere bizarre digressions made by private individuals. The result surely of the combination of their boundless imagination, nightmares or just bad hang outs which were quickly scribbled in papers and sent to the Navy thinking heads. But other ideas were produced by prominent people and deserved the attention of those who were defining the rescue program. They were actual inventors, masters on the areas they were working. That was the case of Lieutenant George B. Gale and John Hampton, renowned ballonists who by that time had performed some relevant ascentions which had gathered international interest.

In autumn of 1849, Lieutenant George B. Gale proposed Lady Jane to use a balloon which should ascent from one of the searching ships and reach a height of two miles to be able to scan a significant part of the horizon in search of any clue which could led them to the whereabouts of the lost expedition.

Though apparently quite a logical proposal for a modern individual, people of that age didn´t receive it with the due enthusiasm and the press, prone to mock any extravance, particularly those related with polar exploration, loomed over Gale ravenously. The Era called him "Columbus of the Skies" in october of 1849, though they used that term for other flying pioners of the time in subsequent publications. The Punch punched a bit stronger with this short and, as usual, acid post: 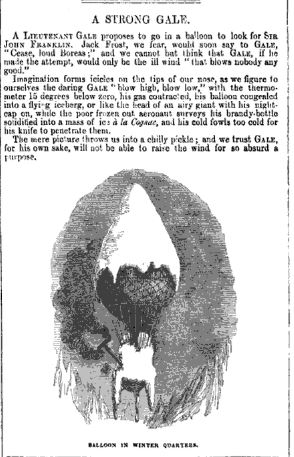 George Burcher Gale, formerly an actor, wasn´t however as stupid as may be depicted by the Polar detractors journalists of Punch. In fact he was a successful balloonist which career as an aeronaut had started at a proper time, 1848, to be of some service for the Franklin expedition rescuers.

By 1850 he had performed at least 114 ascentions. The summer of that year, he kept on describing his plans for rescuing Franklin in the lectures he gave and complaining about the behaviour of the Admiralty which, according to him, had adopted his methods and was performing some tests but with inadequate material and  by "ignorants of principles of aeronatics".He also described his smallest versions, the messenger ballons, which were used during the searching squadrons of 1850 and 1852. 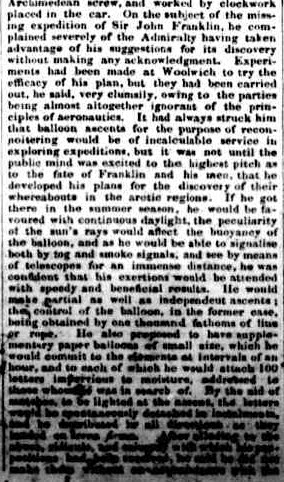 Article Liet. Gale´s plan for the discovery of the missing expedition of sir John Franklin.

It was during an exhibition in september of 1850 in the hippodrome of Vincennes at Bordeaux where poor Gale lost prematurely his life after suffering a mortal accident. By the effect of an unlucky misunderstanding between his team and himself, after landing safely, while emptying the balloon, his men released the ropes which held the aircraft which carried  away an horrified Gale hanging somehow from the basket, which had previously overturned. He was taken to the sky for the partially emptied sphere out of the sight of the astounded audience. His body was found the following day some miles away from the landing point in the middle of a close forest. This bizarre end contrasts strongly and paradoxically with the assertions made by him during the Leicester square´s lecture described in the article posted above on which he claimed that:

"He says that nearly all the serious or fatal accidents in ballooning have happened with inexperienced and incompetent aeronauts, who were unacquainted with the principles and details of the science, and makes the rather bold assertion that there is no much safety in, the car of a well managed balloon as in a railway carriage, the cabin of a steamer, or the inside of a stage-coach" this text

The fact was that the idea had somehow made an impression in the upper circles of those organizations which were collaborating in organizing the searching. Charles Richard Weld, the assistant secretary of the Royal Society proposed precisely not only using unmanned balloons to release papers with messages addressed to the lost men but also using manned balloons to explore the surroundings of the searching ships as far as possible.

John Hampton, another aeronaut, wasn´t a lunatic neither. He was another visonary man who followed the dangerous career of parachutist initiated by André-Jacques Garnerin in 1797. Garnerin was the first on jumping with a primitive parachute from a balloon and be lucky enough of landing roughly but safely in Parc Monceu of Paris after a heart-stopping descent. 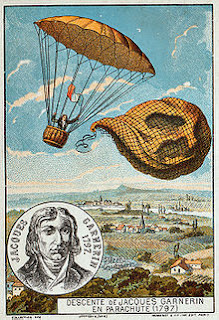 Hampton was an extraordinary bold man who was a reference in the small world of balloonists of the time and who had performed a number of previous flights. To illustrate his audacity, we have the Canterbury´s flight of 1839 which ended with him perched in the hoop of the balloon whose car he had to cut away to reduce weight. If you make zoom in the picture below you could see a tiny Hampton grabbing the rigging of the inflated sphere:


He was working by that time in the combination of two different techniques, hot air balloons which have been forgotten since the arrival of hydrogen filled balloons and parachuting. A hot air balloon could be easier to use in the arctic regions because it made unnecesary to produce the huge amount of hydrogen needed to lift the weight of a man.
In april of 1848, precisely when the remaining crews from Erebus and Terror were abandoning their ships, he was dmonstrating the world again his bravery in Rotundo Gardens, Dublin jumping  from a ballon at a height of 3.000 m (10.000 ft). That wasn´t his first jump, ten years before, in 1838, he had performed a succesful parachute jump in Cheltenham, England, becoming the first englishman parachutist. Here there is an interesting article by John Lucas which describes well his historic jumps and the devices he used in his jumps. 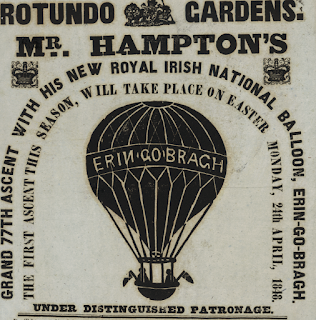 In june of 1850 Hampton proposed the Admiralty to use his improved hot air balloons, called by him "Artic surveying balloons". He apparently performed that same year another demonstration in Rotunda Gardens, Dublin, where it would be tested the messenger balloons and the manned one carrying not one but two passengers on board the basket. The balloon dessigned by Hampton had a diameter of almost 14 m and 21 m of height. 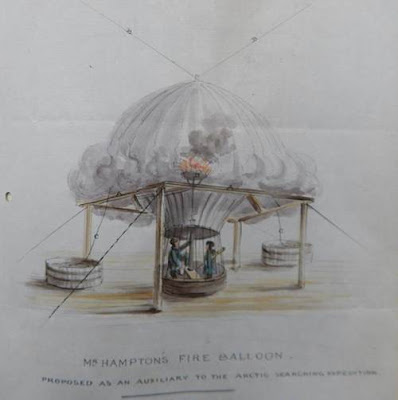 Mr Hampton Fire balloon
For some reason, only his proposal related with messenger balloons, also made by Gale as was described earlier, was adopted by the Admiralty. Likely, the manned option was rejected due to the inmense size of the  necessary fabric for such flights or maybe, someone thought that a hot air ballon could not carry out its duty properly in the extremely cold air of the Arctic regions. Maybe someone in the Admiralty had foreseen this difficulties and was reluctant to sacrifice the so much need room for provisions on behalf of a very likely fiasco which could have been difficult to explain. At the end of the day, we all know the difficulties Scott had to fly his manned balloon in the Antarctic (in "Exploring Arctic Frontiers" is described on which other polar expeditions were manned balloons used before Scott) maybe not carrying them wasn´t a bad decission after all.

But what if they had worked well? Could the use of those innovative  means of transport have been of some usefulness for the searching parties? I guess so and I bet for it. In the book "Hunters of the track" there is a brief discussion about the subject. My opinion is that it could have been useful not only for locating Franklin ships but also for the geographical work, don´t forget that was the underlying target of many of those searching operations. I have no doubt that if available then, John Ross would have found Bellot strait during his expedition of 1829-33 had he used Hampton´s "Artic surveying balloons". Or who knows if the very same Franklin would have recognised from the air that King William Island was in fact an island and not a peninsula as it was widely believed in 1845, saving therefore his life and the life of his men.

That´s a thing we will never know but it is stimulating and tantalizing to play with the idea of  James Fitzjames and Francis Crozier on board a fragile basket, flying over Cape Felix at several hundreds of meters from the ground, with an impressive view at the bottom of their two tiny ships beset and frozen, surrounded by tens of men anxiously looking up at them spreaded like black dots placed in the ice while the officers were spotting through their chilled spyglasses a completely free of ice Rae Strait. That would have changed the dramatic outcome of all this mesmerizing tragedy, don´t you think?