TRAGEDIES OF THE ARCTIC SEAS

I have to recognise that sometimes I have felt like those ones in the audience, represented in the picture below, comfortably seated at the other side of the barrier. 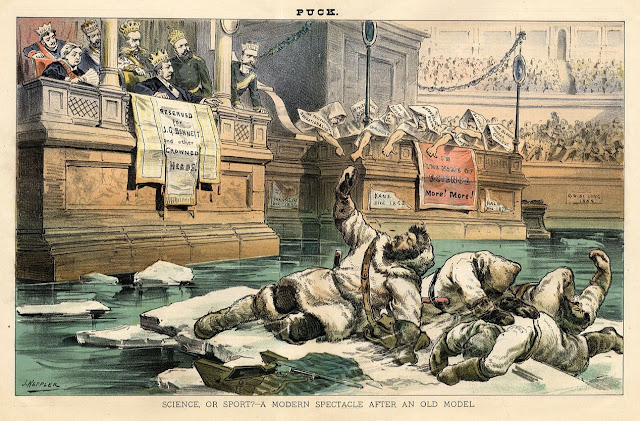 But though not everything in the polar regions have been dramas, there have also been stories of incredible success or miracolous survival, the fact is that even in some of those cases, these feats have been stained with tragedies which happened at the same time and which diverted the attention far from the merit of their brave main characters towards others who lost their lifes. That could be the case of Roald Amundsen and his antagonistic Scott, or the case of Nobile´s attempt to reach the north pola and the subsequent rescue, which was darkened by Amundsen disappearance, happened while trying to locate him. So it looks that in some way or another, death has been always present in these kind of stories and, no matter if we like it or not, we must  get along with it.

Returning to the picture, it shows a group of polar explorers floating in an ice floe confronting surely, as it can be judged for their poor state, their coming death. In a pulpit in front of them, there are several crowned men. The one seated right over the poster which reads:

Must be James Gordon Bennet himself, the director of the New York Herald who was behind Stanley´s expedition in search of Dr Livingstone and of the disastrous Jeannette expedition. He, his men a woman who may be Queen Victoria, are  observing unaffectedly the dying men.

In the adjacent pulpit, you can see a number of men (shall we call them "Scientist?") which look visibly anxious, standing over a poster which reads sinisterly:

In the walls around the stage where the explorers are lying, who almost all certainty are DeLong and his men, are  some other posters where the names of Hall, Kane and Franklin are clearly readible. De Long´s poster is the only which isvisible at the right in the wall, is the only one which hasn´t been torn apart, supporting the idea of its recent setting.

This image, published in the magazine Puck in may of 1882, may be the graphic representation that the times were finally changing and that the world was getting into a totally different and modern age.

The horrible ordeal of De Long and his men, who perished the autumn of 1881 in the barren lands of the Lena Delta after having tried to reach the North Pole, may have trigged the reasoning that not everything was valid, at least not for the public opinion. So, in a similar way as George Cruikshank satirized John Ross when he returned from the polar regions, Joseph Keppler, author of this and other drawings, decided to show the world  through his powerful cartoons that it was time to end with an age on which the phrase "the end justify the means" was a fundamental rule, an axiom which had dragged many gallant men to a cold grave.

After De Long expedition, came new modern techniques and a new concept of Polar explorers, like Nansen, Andree, Amundsen, Peary, etc,  who will shake up the existing scenario. It was clear that something was changing and that an inflection point have been passed. Definitely a new age of polar explorers, was calling at the gates of the North Pole, sieging it.