KRUSENSTERN, A SMALL SHIP WITH THE NAME OF A BIG EXPLORER

When John Ross talked about the second ship he used during his expedition in search of the Northwest Passage in 1829, he refers to it as follows:

"It being also thought expedient to have a secondary vessel of as large a tonnage as our own could conveniently manage, we obtained, by the kindness of the Admiralty, the decked vessel of sixteen tons burden which had accompanied a former expedition intended to the Pole; giving him the name of Krusenstern and we were provided with two boats which had been used by Captain Franklin."

I can´t avoid undestanding, throught the reading of these previous lines, that John Ross was very dissapointed not to have managed to get from the hands of the Admiralty a bigger ship  to accompany the "Victory", his side-wheel steamer. 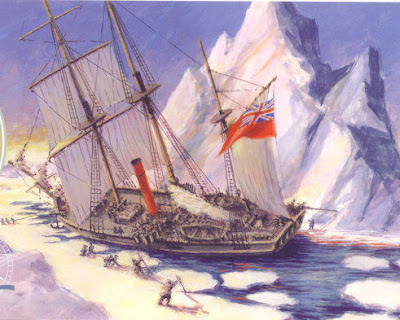 Ross had chosen the Victory because he had virtually fell in love with it when he saw how it, with its 30 horse power engine, towed a much bigger ship of 600 tons against the wind and tide time before. His enthusiasm drove him to improve the powerful engine which had impressed him so much for a supposedly much better  model. The change was made by the inventor John Ericsson, not related with the father of the multinational company, with the result that Ericsson was condemned to be blamed untiringly for his sins by Ross, because the poor performance of the machinery, for the rest of his life.

The new fabulous brand new engine was the source of such infinite problems during the whole journey that it ended abandoned in the shores of Sommerset Island to serve as a curiosity which tourists visit from time to time. That was the fate of the boiler of the Victory but what about the Krusenstern? That name has always sound very peculiarly in my ears. Not the typical name the Royal Navy used for their ships.


The Krusenstern was a small ship of 16 tons which bore the name of a not very well known (at least for me) explorer. Not a polar explorer though, not almost British either. Adam Johann Von Krusenstern was not British but for a time was a member of the Royal Navy. He was born in 1770 in Estonia and died in august of 1846 while John Franklin was travelling south from Beechey island towards his ice prison in the shores of King William Island.


Krusenstern had formed part of the Royal Navy from 1793 to 1799. That john Ross had christened his small ship with the name of Krusenstern is not a coincidence. John Ross and Krusenstern were about the same age, being Ross seven years younger than Krusenstern. They didn´t sailed together but as Maurice James Ross mentions in "Polar Pioneers" both men met after 1814 while Ross was in command of a small sloop of 16 tons called Acteon.

Krusenstern was by then a reknown explorer who had circunavigated the world during the years 1803 and 1806, the same expedition on which one of the discoverers of the Antarctic continent had also participated, Fabian Gottlieb Bellingshausen. Maybe John Ross, Fifteen years later remembered that encounter when he was given the command of his small secondary ship and inspired by some sacarstic sense of humour decided to give the name of such big explorer to such small boat. The name of Krusenstern was also given to a very different kind of ship which honoured him in a much proper way, a four masted training ship which was built in 1926 in Germany. The ship was given to the Russian army by the germans in 1946 (one hundred years after the death of the explorer) and was baptized with the name of Krusenstern.

But this is not the only connection between both men. M.J. Ross tells in his book that Ross was occupied during his last year of life in the edition of the English translation of the  Memoirs of Admiral Krusenstern which had been translated by Krusenstern daughter Charlotte Bernhardi. Ross proposed the book to be dedicated to the Royal Geographical society and his wishes were accomplished.  John Ross´s name appears in big letters in the front page of the book: 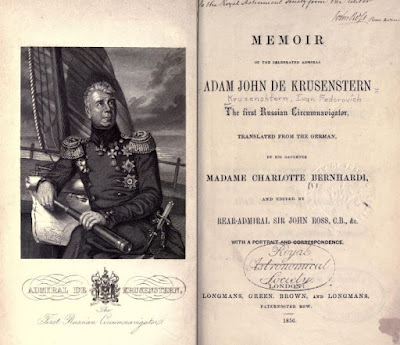 Whatever happened during that encounter in 1814 (actually it was in 1815 as we soon will see) it left a deep print in the heart of the stubborn John Ross. The two facts of naming a ship after Krusenstern and  editing his memoirs, speak by themselves. Krusenstern memoirs is a short book of hardly eighty pages.

What did I do next? Of course I had to check what was inside this memoirs, ROss and Krustenstern had some kind of strong link, what better place to find it than in Krustenstern biography?

I found the answer easily. A quick search on it led me to find the name of Ross several times mentioned on the book. It could look as a long text but I thing it is worth to transcribe it completely here:

In the year 1815, Admiral Krusenstern being employed by the Russian Government to purchase    two English frigates, proceeded for that purpose to Plymouth, and was met by the Editor of this Memoir, then captain of His Majesty's ship Actaeon (JOHN ROSS), at the hospitable table of the late Sir Byam Martin, G.C.B., at that time junior Port Admiral at Devonport. The conversation happening to turn on the navigation of the White Sea, which had been recently surveyed by the Actaeon, the Editor mentioned that he had determined the latitude of Archangel by observation, and also the longitude by the occultations of the satellites of Jupiter, simultaneous observations having been made at Greenwich. The Russian Admiral said " I have determined the longitude of Archangel by the same method," and it also appeared that both had observed in the dockyard. Sir Byam Martin immediately said " I should like to know how you two astronomers agree. I have two sons (who are now both Admirals) : one shall go home with Admiral Krusenstern, and the other with Captain Ross, and you shall send me in writing the latitude and longitude of Archangel." This was accomplished, and it turned out that the latitudes agreed within a few seconds, and the longitude to the nearest minute.
It need scarcely be added, that the above satisfactory result tended more closely to cement the friendship that had previously existed between them, but which was more fully exemplified by the hospitality and kindness subsequently shown to a cousin of the Editor, Mr. E. Cuninghame, who is now no more, to whom he gave a letter of introduction to the worthy Admiral, on a visit that gentleman made to St. Petersburgh, where he remained in the society of his amiable family for many months, and not very long before the noble Admiral and sincere Christian was removed from this to a better world.

The letters addressed to John Ross, published together with Krusenstern memoirs, shown that the Admiral always demonstrated great interest by the feats achieved by the Royal Navy in the Arctic in search the Northwest passage, as well as a strong and a lasting friendship towards John Ross. The feeling was reciprocal. Ross not only named his small ship after the Admiral but also some geographical features as at least one lake during the journey.

In the drawing above we can see the Victory gently sleeping in her winter quarters in Felix harbour and another red boat in front of it with a small mast. Could this small ship be the Krustenstern? Both, the Victory and the Krustenstern were painted in red with the intention they could be easily distinguished in the snow from distance. The boats, formerly belonging to Franklin (I wonder to which expedition), were also painted the same colour.

The Krusternstern had an hazardous life during the Ross expedition, it was almost all the time towed by the Victory and for some time, buried so deeply under the ice that the crew thought it would be impossible to recover ever. It was finally freed, but in spite of the efforts, her destiny was intimately joined to that of the Victory and was brought on shore, fill with sails and other equipment to be subsequently abandoned in the Arctic. Nothing remained of it, maybe the tides swallowed it or maybe Inuit people made the most of its timbers.

But... which was that former expedition where the Krustenstern had participated which Ross mentions in his narrative?, we still have a small mistery to solve here. Could the Krustenstern be the boat with which the Admiralty pretended to survey the northern and eastern coast of Spitzbergen ,under the orders of Lieutenant Foster, while Parry and J.C. Ross were performing their attempt to reach the North Pole? I don´t know of any other previous attempts to reach the North Pole than those of Franklin in 1818 together with Buchan, where as far as I know, any 16 ton ship was mentioned, and that other attempt of Captain Phipps made much earlier.

As it happened with that training ship mentioned before, the name of the russian Admiral was given to a ship not when it was launched for first time but in a second round. I couldn´t find any further clue about the origins of our little friend of 16 tons. As it uses to happen when one plays at the game of being a researcher, there are always loose ends difficult to tie. Let´s see if any reader could put some light to the beginnings of this small and secondary but at the same time great and gallant ship.
Publicado por Andrés Paredes en viernes, marzo 03, 2017