ABOUT GRAVES, CAIRNS AND PAPERS

Not long time ago I talked here about other winter places where other expeditions had opened small graveyards during their long stays in the Arctic. They did it while trying to find a way through the Northwest Passage or while looking for the lost Franklin expedition. The more one investigates the more one realises that it seems that the arctic is virtually full of these tiny mini-graveyards or at least it was once full of them. Now we can see only what has been left of them, which amazingly, is more than one could expect at first sight.

Thanks for a link to a webpage which has recently fallen in my hands, kindly provided by the enthusiast Franklinite Regina Koelner, and thanks too because an article, which Peter Carney has facilitated me, I have been able to gather enough information to show you another interesting place  which rests right at the doors of the beautiful but dangerous jaws of the Arctic Archipielago. 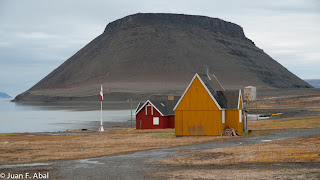 Monte Dundas North Star Bay, by Juan F. Abal
https://blog.morabal.es/groenlandia/dundas-steensby-land
Thanks to Juan F. Abal, traveler and great photographer.
The North Star expedition of 1849-50 led by the Master James Saunders is not a well known expedition. However, the historian R. J.Cyriax found it fascinating enough as to write a short article called "The Voyage of HMS North Star". Their  mission was apparently simple, resupplying a rescue expedition which had been sent after Franklin and his men in 1848 under the command of James Clark Ross. James C. Ross together with Edward Bird were stopped in Lancaster sound on board their ships HMS Investigator and HMS Enterprise. Orders said that if James Saunders was unable to find Ross, they had to leave the stores at some specified places on the south shore of Lancaster sound.

The North Star tried to find its target during the summer of 1849, but, after being unable to find Ross, the increasing and growing ice forced them to winter in the northwest coast of Greenland. The ice spat them, providentially before being crushed,  into a free of ice small bay which they called (how not) North Star Bay. Paradoxically, what Saunders didn´t know was that J.C. Ross had come back to England that same summer.

James Saunder was an experienced sailor who had accompanied George Back as master in the HMS Terror in his voyage of 1836-37, however, his expedition was not prepared to winter in the Arctic. They had been specifically ordered to avoid that situation, but orders, are like the wind in the Arctic. Orders can push you into one direction and your fate can push harder you into the opposite one.

They had to fight their way to survive during the killer frozen months when the sun disspears under the horizon. That unexpected situation cost them a high price. Four of the 63 crewmen died during the winter and spring of 1849 - 50. It is said that the deaths weren´t provoked by hunger (remember they carried tons of extra stores to be deployed somewhere) nor by cold, ...by what them? .The fact is that I haven´t found anywhere any reasonable explanation for those four deaths.

North Star Bay is a place which, in my opinion, has certain resemblance with the geographical features of Beechey Island. As it happen in the latter, there are here too steep cliffs and a prominent table-shaped mountain which emerges from the ice in winter and from the seas in summer. That gives the place a creepy atmosphere, where a dwarved ship  beseted at the feet of the mountain by the smooth ice of the bay, looks like if it were lying in an inmensive grave headed by some sort of giant tombstone.

It was in the south coast of this small bay where was built our small graveyard. One mile and a half inland from the beach. The four men died one by one during one winter which a lot of accounts of the time describe as an uneventful winter. Definitely it was not uneventful for the four poor men who were buried there. Close to the graves was built a big cairn which was a matter of discussion for David Woodman in his book Unravelling the Franklin Mistery. But that´s another different story.


In the course of the first winter endured for some of those Arctic expeditions, usually there were several casualties, normally from one to four and sometimes more. As for an example, the three famous men buried in Beechey Island during the first winter (1845-46) of the last Franklin expedition, four men during the second Parry expedition, three men lost by George Back during his expedition in HMS Terror 1836-37, etc.

Lack of preparation could have been one of the causes. One of the main differences between this expedition and Franklin´s one, for instance, could be that while the Franklin´s one was exquisitely prepared to spend three or four winters in the arctic, the North Star´s one must be back at home before the winter will fall.

Perhaps the selection of the crew was not so rigurous as it could have been for the Franklin expedition. Perhaps James Rae, the assistant Surgeon of the ship could have told us what happened during that winter,...yes, you have read it well, James Rae. And now I will try to answer the question you have in mind. I have found data about two different James Rae of the time who were assistant surgeons in two different websites. In the first, the Tait´s Edimburgh Magazine,  it is said that this man was the son of a John Rae from Myre, Orkney Island (suspiciously close to the location of the Hall of Celestrian). He died in front of the coast of Biafra, Africa on board a steam vessel called Pluto. Likely the ship which was capturing slave ships in 1860.

Capture of a large slave ship by HMS Pluto 1860
The second reference states that this James Rae was born in 1821, and that he was the one who participated in the North Star expedition of 1849-50. He was the son of a Doctor called John Rae, at St Ninians (near Glasgow I think) but there is no mention about our beloved John Rae the famous explorer. Could that important data be omitted? I find that fact of such significance as to be mentioned in his short biography. If he was, then I didn´t know John Rae´s brother was a Polar explorar too! Tons of paper would have been written about  John but not too much about his brother. I couldn´t find any decissive clue in the books "Fatal Passage" or in "Lady Franklin´s Revenge" nor in some other books. Should we then think that they weren´t actually brothers?.

Returning to North Star bay, it has taken me some time to identify where the four graves of these poor sailors were dug. At first, I though they were placed in the flat istmus which links Mt Dundas with the mainland. After, and according to certain pictures, the drawing of the burial site, and thanks to a short description of the place.  I have located the graveyard  at the other side of the bay, in the south coast and close to the harbour. The mountains in the background must correspond with those at the other side of the Pituffik glacier.

There is at least one burial plot on the istmus but it seems clear that the remains of these men were buried on the other side of the bay,

James Saunders left several cairns with records which were found time after for other rescue expeditions. One of the recovered  notes reminds me strongly the sober content of the sadly famous Victory Point Record left by the Franklin expedition in King William Island. The note reads:


They found some other papers telling the same story, in the back of one of them were written the names of the men who died in that desolate place. The paper said:

It is funny because another fellow Franklinite, Randall Osczevsky, raised not long time ago the issue about why James Fitzjames and Crozier left so scarce information on the paper they left under the cairn of Victory point if they had a whole blank side of the paper to explan all the proceedings of the ships till the date. They even scribbled the margins of it but it seems that they despised, or never thought on, the idea of writting in the back side of the paper,...well. James Saunders did that, why didn´t they do?.

The graves and the records were not the only thing the James Saunder´s expedition left in the Arctic. They left too their stores, as far as Wollaston Island, a place close to the mouth of Lancaster sound. The cache was soon looted, apparently by locals.


Only one tombstone remains there, that of William Sharp. The others seems to have dissappeared. I have read that this one was  moved further inland, perhaps the other were swallowed by the increasing level of the sea forever. The grave of William Sharp is and will be there for now witnessing how war ships come to the shores of the North Star Bay and see how planes land and take off from the Thule air base which was built there.