Surely a lot of you know well Beechey Island, where it is and what you can be able to find there. Beechey island is that desolate piece of land where the Franklin expedition spent its first winter of 1845-46 and where their first three casualties were buried.

It is somehow, less know that about 500 km (260 nmi) west from there is another tiny island where other three graves are looking at the icy sea of the Melville sound. All the information I have summarized here comes from a 1964´s article in Canadian Geographic  written by C.R. Harington and has been completed with some data which comes from my recent research done to allow me draw the "Arctic Graveyard" map.

William Edward Parry named the island after one of his midshipman of the HMS Hecla, William Justin Dealy, on his voyage towards the discovery of the Northwest Passage in 1819. It wouldn´t be until years later, in 1851, when another celebrity of arctic exploration will step on that island. He was Leopold McCLintock, who leading a sledge party as part of the Horatio Austin´s expedition, mapped and described the island.  A year later, in 1852, again McClintock as second in command of the Kellet´s expedition reached again the island on board the ships HMS Resolute and his tender HMS Intrepid.  This time they had to winter there. On doing that they put a flagstaff and stablished a big depot of supplies.

It was that winter when Thomas Mobley, steward of the HMS Resolute died. It seems that he had been "incapable of any great exertion" for a long time, apparently because a latent heart disease. The 18th of october he went up to the upper deck without the proper clothing. The difference of temperatures did the rest of the job. He died almost instantly and, according with the narrative of the voyage:

"...many days were occupied in getting sufficient depth beneath the surface, and even then we were compelled to rest satisfied with only two feet eight inches, and to effect this, powder was obliged to be resorted to, in addition to pickaxes, shovels, and the usual implements for digging."

Those are the virtues of the permafrost. Eight days after his death, the 26th october the crew of both ships were gathered in the island to perform the funeral after having dragged his coffin on a sledge from the ships to the coastline. 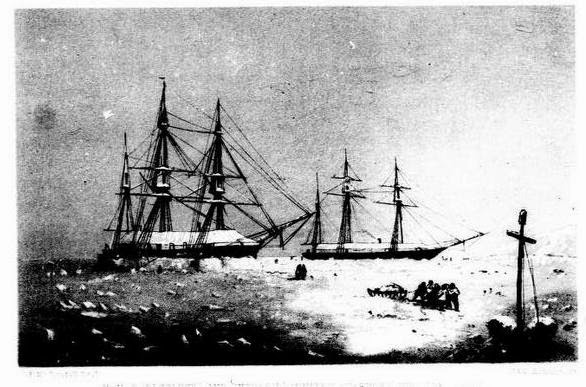 Ensigns on board were hoisted half mast and the bells tolled. It was a windy and unpleasant day, but they always are under those circunstances, aren´t they?.  His grave was located in a place near a beach in the eastern shore of the island.

There is another version of his death which tells a very different story, the one above comes from "The eventful voyage of HM discovery ship Resolute  to the arctic regions", the official account. The other comes from the book HMS Resolute. On it, is described how Thomas Mobley fell to the cold water while coming back towards the ships in the course of a sledge trip which was lead by Hamilton. It is said that he was taken out from water already dead. As Elizabeth´s book is a sort of a dramatization of the adventure, we should take for granted the description of the original and official narration. The grave of Thomas was soon accompanied by the grave of George Drover, Captain of the forecastle of the Intrepid. The difficulty of digging his grave is described in the narrative of the voyage:

"The deceased was then conveyed to his last resting place, beside the grave of our much regretted steward. Much difficulty had been experienced in digging a grave; for in addition to the the heavy gale, ..., the ground was frozen as hard as granite, on which the crow-bars, pickaxes, and shovels made little or no impression. ... After a week´s labour a depth of two feet ten inches was obtained".

It was during this expedition when contact was made by Bedford Pim, from the Resolute, with Robert McLure, who was in ice-choked HMS Investigator in Mercy Bay. Pim appeared as a ghostly vision to rescue a "sat on the verge" Robert McLure from the disaster. It was in Dealy island where both expeditions get together.

Meanwhile, Kellet have ordered the construction of a stout store house of big dimensions (40 feet x 14 feet) with thick walls. Remains of this building were still visible in 1978 as you can see in the picture below. As a curiosity, among the hundreds of items left in that caché there was a Halkett boat.

One of the things which has impressed me more is the fact that one of the Kellet´s boat was found in pretty good conditions even after 54 years of its abandonment (see picture below). The Canadian Captain J.E. Bernier on board the D.G.S. Arctic, landed in the island in 1908. He discovered that the Kellet´s caché was still  untouched. Documents were found in containers which still preserved their seals. They also found the three graves with their respective tombstones still erected, and, yes, a 14 feet whale boat which was hurriedly left behind by Kellet after the ice suddenly had released his ships from their trap.

The innaccesibility of the location of Dealy Island made possible this little miracle, this time the boats remained untouched by human hands. The reason of the abandonment of this boat makes me think about the reasons which could have forced the men of the Franklin expedition to abandon their own boats while trying to escape from King William Island. Dealy Island´s boat is an opportune clon of those abandoned boats of King William Island and its picture allows us to travel in time to see or imagine what McClintock saw when he found them. The boat was taken on board the D.G.S Arctic and carried to the National museum.


The three graves with its tombstones were still there in 1917 when Steffanson arrived at the island, but the tombstones covered by moss were not standing anymore. Even in 1961, when the men from an aircraft landed in the sea in the eastern side of the island, they were still easily recognizable.

That is the last time it is mentioned its existence in the Harington´s article. However, there were more visits after those mentioned and defenitely the graves were always seen by all the subsuquent expeditions. The place is described in this article where you could find detailed pictures of the store house with interesting pictures of some of the goods left there, leather boots, and so on....even more could be found in this unpublished article if it had been published..."Yorga, Brian 1979. Kellet's Storehouse, Dealy Island, Canadian High Arctic."

All those expeditions which ended on that island tasted the mid nineteenth century delicacies stored there but any of them disturbed the graves. I wonder if the resting place of these three men, much less known than the three Beechey Island men, is still untouched. I wonder why any of those numerous expeditions took the oak tombstones with them and replaced the originals for new ones as it happened in Beechey Island.  I wonder where the Resolute´s boat will have ended its days and if it is still visible for the public somewhere or if it was tore into little pieces to feed some fireplace.

I wonder I wonder I wonder...
POST-EDIT:Please visit this HMS Resolute blog to learn more about the winter they spent in Dealy island and to see how the graves were in the XX century.
Publicado por Andrés Paredes en miércoles, febrero 18, 2015