THE LAST FRANKLIN EXPEDITION AND THE NORTH MAGNETIC POLE

It was after reading some comments written by some friends about if the main objective of the last Franklin expedition was discovering and crossing the Northwest Passage (which of course it was) or, doing magnetic observations than again a doubt in my head has sprung.
No matter if it really was  one of the main objectives or not, it is hard to believe that, having being trapped the Erebus and Terror ships so close to the Magnetic North Pole and for so many time (see the below reference), no attempt were done in order to reach that coveted point.
"25th April 1848 HMShips Terror and Erebus were deserted on the 22nd April 5 leagues NNW of this having been beset since 12th Sept 1846". Excerpt from the Victory Point Record.

﻿
As it is posible to see in the above picture,  the Magnetic North Pole drifted from the North to the South since the year 1600 and after1810 or so  (where, precisely and by pure coincidence, it found its  inflexión point  in the King William Island) it began to go northwards till it was reached in 1831 by James Clark Ross in the course of the John Ross expedition in the HMS Victory ship. From 1831 to 1904 it doesn´t seem that the North Pole had drifted so much, then it is plausible to imagine that its position could have been near in 1847. The Franklin expedition was even nearest from it than the Ross´es were in 1831 when they were in Felix harbor.
Then, on 25 of May of 1847 the ships were on a privileged position to reach the North Magnetic Pole, "28 of May 1847 H.M.S.hips Erebus and Terror Wintered in the Ice in Lat. 70°5'N Long. 98°.23'W". Excerpt from the Victory Point Record.
They were only 16 miles northwest of Cape Felix, from Cape Felix to the Clarence Islands there is only 14 miles and from there to the position of the North Magnetic Pole there is another 30 miles or so. We have to have into account that a White man´s cairn is described by David Woodman in the book "Unravelling the Franklin Mistery" pg. 75. This Carn can demonstrate that an attempt to reach the North Magnetic Pole was done by a sledge party from Cape Felix going eastwards. In the Wikipedia´s description of the expedition  we can find a reference about the searching of this misterious cairn, which it seems to be that it was never found:
"In 1995, an expedition was jointly organised by Woodman, George Hobson, and American adventurer Steven Trafton – with each party planning a separate search. Trafton's group travelled to the Clarence Island to investigate Inuit stories of a "white man's cairn" there but found nothing. Dr. Hobson's party, accompanied by archaeologist Margaret Bertulli, investigated the "summer camp" found a few miles to the south of Cape Felix, where some minor Franklin relics were found. Woodman, with two companions, travelled south from Wall Bay to Victory Point and investigated all likely campsites along this coast, finding only some rusted cans at a previously unknown campsite near Cape Maria Louisa. "
If the Lieutenant Graham Gore together with Charles DesVoeux and six men reached point Victory from the ships in only three days, (16 miles to Cape Felix plus 24 from Cape Felix to Victory Point, measured in Google earth always as the crow flies),  it is fair to asume that the Franklin expedition had established a base camp in Cape Felix to launch from there several sledges parties towards different points, for example toward the west coast of KWI (Victory point), towards the east coast of KWI (as other relics found there seems to demonstrate), and of course towards the North Magnetic Pole which should be then some miles north of the point reached by J.C.Ross in 1831. 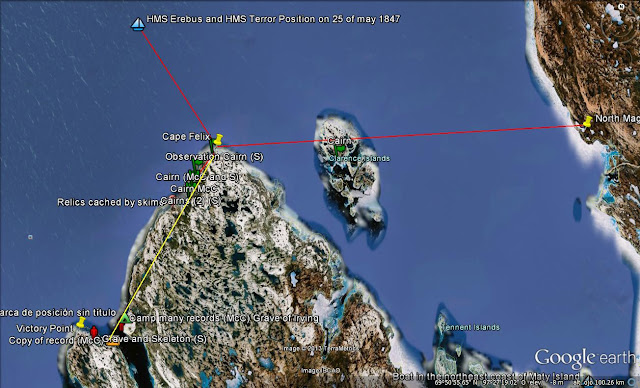 Position of the ships, North magnetic pole in 1831 and the Victory Point by Andrés Paredes in Google Earth.
Then, and here comes my conclusión, I think that, the men of the last Franklin expedition could well and easily having reached the North Magnetic Pole in the summer of 1847 when the things on board still were "All Well", and that if someone, someday is able to establish the exact position of the North Magnetic Pole the year of 1847, they will find there (hopefully and for my understanding, LIKELY) the rests of a sledge party camp and perhaps the rests of another observation Cairn and they could then add to the rest of the achievements asigned to their expedition, the fact of having reached, again, this Grial of the magnetic observations and science.