THE MAN WHO ATE HIS BOOTS (THE BOOK) 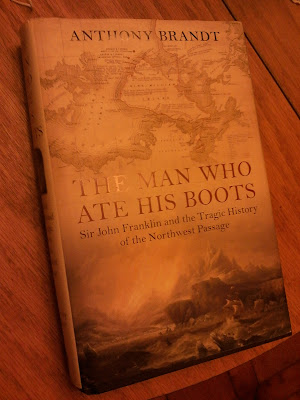 At last I´ve finished the book of Anthony Brandt, I bought it in London without having read any review about it, (a risk if you consider the large amount of Franklin books available in the market) but the cover captivated me, and I fell into its claws. It has taken me so long read it because I began, soon after  beginning  to read it, reading at the same time "Arctic labyrinth" by Glyn Williams.

In my opinion this is a very good book to make yourself an idea about the different expeditions led by John Franklin and a lot more related. The book is full on transcriptions of the original narrations  of the voyages and, from my modest knowledge of english, it is well written, so that you can follow the neverending secuence of expeditions without being lost and without getting tired. However, I think that it lack of maps, hardly three or four maps in the whole text, helps you to find yourself in the arctic. A lot of geographical names which are mentioned don´t appear in the maps, so  you are unable to identify, without a near laptop to check the places, where exactly you are sailing or dragging a sledge.

Another good thing is the summary of the expeditions that you can find at the beggining of the book, which also helps to check once and another who was the first on reaching and discovering each place and in what date. And finally, there is an unvaluable chapter called "Sources" on which the author reveals the sources of information of every part of the book which has been narrated, so you can get deep, if you are interested, on a particular part.

CONCLUSION: In my opinion It is a book recomended, specially if you are beginning in widening your knowledge about the arctic, or if you were captured by the last and lost Franklin  expedition and you want to learn more about his former journeys and to put order in the other main expeditions that forged the discovery of the different Northwest Passages.
Publicado por Andrés Paredes en sábado, octubre 06, 2012