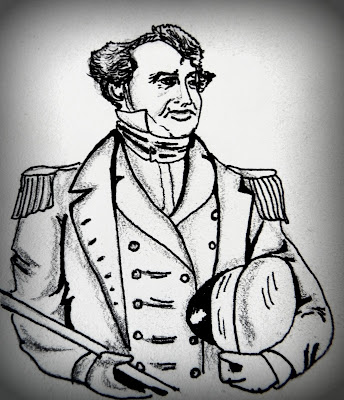 Here we have James Fitzjames. Let me be hard with myself and self -critical (is the way to improve).

My drawing reminds me more of the father of the Adams family (with all my respects for him, of course) rather than the real J.Fitzjames....but at least his impossible hair and the uniform are similar. The original picture is here.

Again I crash with the problem of the eyes. It is a matter of practice, practice and more practice, specially if you are an untrained cartoonist as it is my case.(Feel free of making any constructive comment to me).

This man is defined as "the mistery man of the Franklin Expedition" in the title of the book of William Battersby, I think that because of the several ´gaps´ or ´lapsus´ existing in the path of his live, including the fact of their appointment as the second in command with Franklin in his last expedition .

There is a web page dedicated to him and to the book mentioned before created by William Battersby here :  http://www.jamesfitzjames.net/default.html.

I have the book over my table waiting to be reading soon and I have to say that I am anxious to read it. Again, I have to redirect my post to a thorough review of this book which only increases my anxiety of reading it. I can assure you that is a hard task to decide what is the next arctic or ´Franklin´ book to read because the list is inmense and not all of them are good enough. This year I´ve been focused on the 1819´s Coppermine Expedition of Franklin, and it is hard to leave apart the two journals which I had also waiting, the George Back and Richardson ones edited by C.S: Houston, but it is good to change of focus once in a while.

If there is no patience enough to read the book in order to know better this man, there is a short, and more or less complete biography  here, though I recommend to contrast oportunately its content.

What seems to be true is that he had a sharp sense of humour and that he had some kind of emotional intelligent as it seems that can be deduced from some of his commentaries about his mates.

To finish this comment, and while I am advancing in the knowledge of the careers, personality and character of these men, I think that far from other considerations that have been told about this expedition, the team seems to be an excellent body of people, hard, prepared, experienced, clever, etc. In fact the conditions had to be very hard, and obviously they fought against a certain death during several years and achieved to survive despite all this time being ill. It is impossible to imagine how would you feel walking on that desolate land dragging an absurdly heavy boat, extremely ill, starved and with your moral absolutely destroyed watching how your collegues are falling every day besides yo.

Likely If I were one of these officers selected to join the expedition and with the knowledge they had, I hadn´t chose any other better companions to afford that calamity.